Perhaps more than any other country in the Gulf region, the UAE has succeeded in exploiting its resources (especially oil and gas) and strategic geographical position to achieve truly impressive growth. As a result, it is a rich market open to international trade and investment with a diversified economy and excellent infrastructure and logistics.
Economic indicators reveal constantly positive GDP growth over the last 10 years (341.3 billion euros in 2016, +2.3%), making it the world’s seventh highest country in terms of per capita GDP (at purchasing power parity) with more than 66,000 euros. The construction sector is the third most important industry following oil and trade and consists of a total of around 6,000 companies, mostly located in Abu Dhabi. Construction sector investments totalled 56.2 billion euros in 2016, an increase of 24% since 2006, and account for almost 84% of the country’s total investments.

Following the contraction in other GCC (Gulf Cooperation Council) countries triggered by falling oil prices, Dubai is now the largest construction market in the region, additionally boosted by the major projects undertaken in the Emirate in the run-up to Expo 2020. The country’s investments in construction fell by 8.6% in 2016 with respect to 2015 following three years of continuous growth in the sector (+7.4% in 2013, +4.1% in 2014 and +1.9% in 2015). According to figures published by MEED (Middle East Economic Digest), 44% of contracts awarded in the construction and transport sector in the GCC area in the first six months of 2016 were in Dubai. In this context, preparations for Expo 2020, a world event held for the first time in a Middle Eastern country, will not only boost incoming tourist flows but will also create new jobs and push up demand for new structures, including hotels, homes, shopping centres and entertainment complexes. Ahead of Expo 2020 the annual number of new housing units is expected to rise to 39,000. This has boosted the recovery of the real estate and construction sector, and a number of projects that had been interrupted due to the 2008 crisis have been resumed and are under construction. In December 2015, Dubai passed the 2016 budget approving a 12% increase in expenditure for infrastructure investments. According to two different studies conducted by Deutsche Bank and Global Investment House, Dubai will allocate approximately US $43 bn to infrastructure implementation ahead of the Expo, of which around $10 bn will be spent on developing and improving transport.

Ongoing projects include expansion of the new Al Maktoum International Airport located in the Dubai South district, which will cover an area of more than 145 km2, and extension of the Dubai metro with the construction of the third line connecting to the Expo. Additionally, the national Etihad Rail project will provide the country with a high-speed passenger rail transport network and will carry freight from mining areas to ports of export. The new Midfield Terminal Complex (MtC) of the Abu Dhabi International Airport is due to be completed by the end of 2017. Numerous projects are in the pipeline, including construction of the capital’s cultural district in the Saadiyat Island area which will host a high concentration of top-level cultural institutions and the Dubai Creek Harbour, which is expected to become one of the city’s most important tourism and residential locations with 9 residential districts, 22 hotels, a yacht club, a marina and the port. 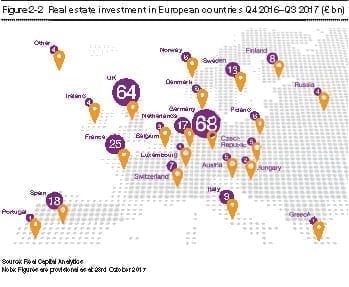 The most important resources are in Germany, the UK and France