With properties increasingly envisaged as service spaces rather than mere assets, the biggest challenge facing the real estate sector is its ability to respond to the complex and rapidly-changing situation with the rapidity typical of financial investors.

This is one of the key messages to emerge from the real estate trend report for 2018 published by Price Waterhouse Cooper and the Urban Land Institute. The report reveals a high degree of dynamism within Europe but considerable variability between different countries, with Northern Europe much more aggressive and competitive but Southern Europe sluggish. Italy emerges particularly badly from the report. Only Milan has any kind of appeal for investors (despite lying in the second half of the rankings of major cities), whereas Rome languishes 28th out of 31 cities analysed, ahead only of Athens, Moscow and Istanbul. Italy’s capital is attractive only for the hospitality sector and to some extent commercial real estate given the strong tourist industry, but is essentially unattractive for office investments. Overall, between the fourth quarter of 2016 and the third quarter of 2017, Italy attracted a total of €9 billion of real estate investments compared to the €68 billion of Germany, the €64 billion of the UK (which is performing strongly in this sector despite Brexit), the €25 billion of France, the €18 billion of Spain and the €13 billion of Switzerland. The only countries to show worse performances than Italy are Finland, Poland, Czech Republic, Austria, Ireland, Hungary, Portugal and Greece, in that order. Moreover, observers note that real estate investments are benefiting from a strong inflow of liquidity, partly due to the modest and in some cases negative returns on fixed income, and the sensation that equity investments have reached very high price levels. The present low interest rates are also benefiting real estate investment, which is currently much more remunerative than fixed-income investments.

The report also lists the most promising real-estate sectors. At the top is logistics, which includes both large spaces for goods (driven by the unstoppable growth of e-commerce) and urban logistics centres located closer to the end customers. This trend is already underway in the United States and now arriving both in the UK and on the European continent. Other promising sectors for investments revealed by the report are: student accommodation, hotels, nursing homes, residences with services, shared offices complete with services, private hospitals, data centres and small storage spaces for personal belongings. In particular, private hospitals and nursing homes are set to benefit from the demographic trend, although the authors of the report believe that developing an effective management and business model remains a challenge.

The European cities with the most attractive real-estate markets remain London (€31 billion of transactions between October 2016 and September 2017), followed a long way behind by Berlin (€9 billion), Paris (€8 billion), Frankfurt and Madrid (€7 billion), Amsterdam and Munich (€6 billion), Hamburg, Vienna and Copenhagen.  Milan remains in the lower half of the rankings (but not far behind Vienna), although the Lombardy regional capital continues to be perceived as a city with “a different history to the rest of Italy”. 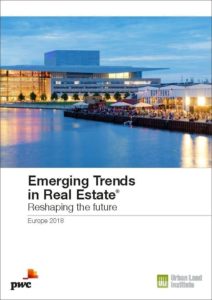 The strong market performance is expected to improve further ahead of Expo 2020.