Article published in: "In-person Cersaie is well received by visitors"

At Cersaie 2021, the “building, dwelling, thinking” programme hosted the first exhibition devoted to the work of a group of young architects carried out as part of the G124 project launched by Renzo Piano, as well as a conference that discussed the themes of the project with Matteo Agnoletto, Stefano Mancuso, Edoardo Narne and Edoardo Tresoldi.

When Italian President Giorgio Napolitano appointed Renzo Piano a senator for life, the celebrated architect felt he wanted to do something useful for his country that would involve young people and the suburbs of Italian cities. In 2014, he set up G124, a working group consisting entirely of young architects under 35 years of age who would be paid from the salary he received as a senator. The name of the project, G124, refers to the number of the room allocated to Renzo Piano in Palazzo Giustiniani in the Italian Senate. Coordinated by scientific directors consisting of professors at Italian universities and with the support of a range of other professionals (sociologists, anthropologists, economists, critics, urban planners, etc.), these young architects were assigned the task of developing year-long projects to “mend a suburb”. Every year since then, groups of young architects have been working on projects in cities all over the country.

Rather than choose the suburbs based on applications, it is the G124 group itself that examines the opportunities and potential offered by different Italian cities and decides where to concentrate its efforts for the year. In 2020 and – owing to the pandemic – part of 2021, the cities involved were Padua (with a project in Parco dei Salici that was completed a few months ago), Modena (a project in Parco XXII Aprile, currently in progress) and Palermo (a project in the ZEN neighbourhood, also currently in progress). 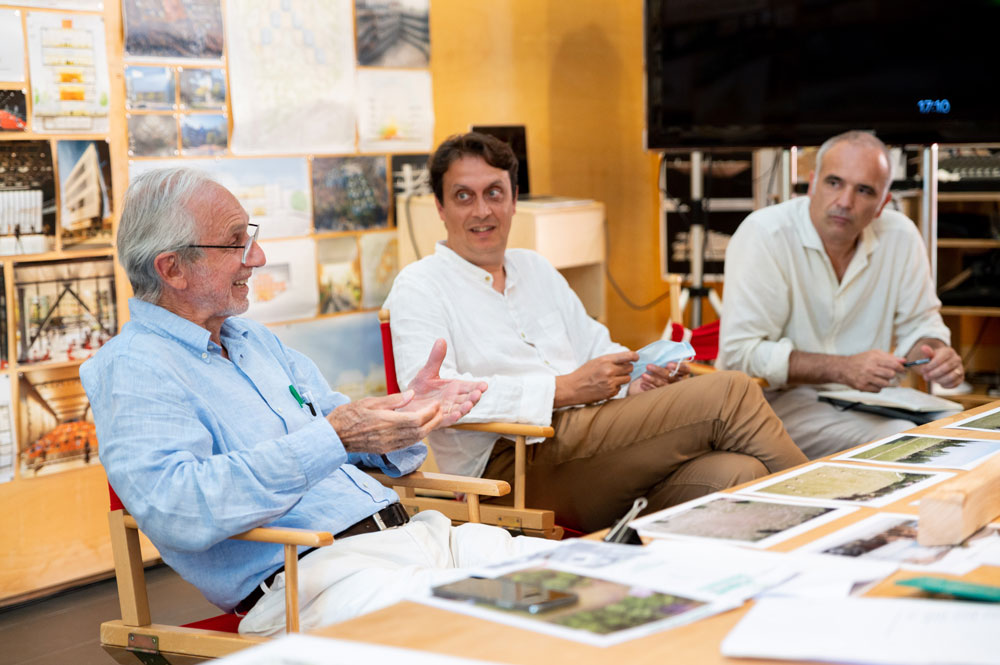 This project is dedicated to my friend, senator for life Claudio Abbado, who had a project of his own for the Italian Senate but did not have time to complete it,” “He had a dream, almost an obsession, that music would be taught in Italian schools. He felt that music is a kind of extraordinary garden, but one that must be used by children. His sense of civic engagement was always closely bound up with music: music as a means of redemption for prisoners, music to empower young people, music as a way to get children off the streets. Driven by this aspiration, he collaborated with José Antonio Abreu and would occasionally disappear off to Venezuela.He has always been convinced of one thing, and so am I: beauty will save the world. One person at a time, but it will do it,” said Renzo Piano.

Cersaie 2021 devoted an exhibition to this innovative experience launched by Renzo Piano called G124 Renzo Piano: mending the suburbs. A journey through Italian cities. It presented a selection of projects carried out since 2014, with special emphasis on those currently in progress in Modena, Padua and Palermo.

The inauguration was followed by a conference held in the Palazzo dei Congressi entitled “Beauty will save the world.One person at a time, but it will do it. The experience of Renzo Piano’s G124 project ‘Mending the suburbs’”. The guest speakers were Edoardo Narne, lecturer in Architectural and Urban Composition at the University of Padua, Stefano Mancuso, lecturer and director of the International Laboratory of Plant Neurobiology at the University of Florence, artist Edoardo Tresoldi and (in video link) Andrea Sciascia, professor of Architectural and Urban Composition at the University of Palermo, while Matteo Agnoletto acted as moderator. 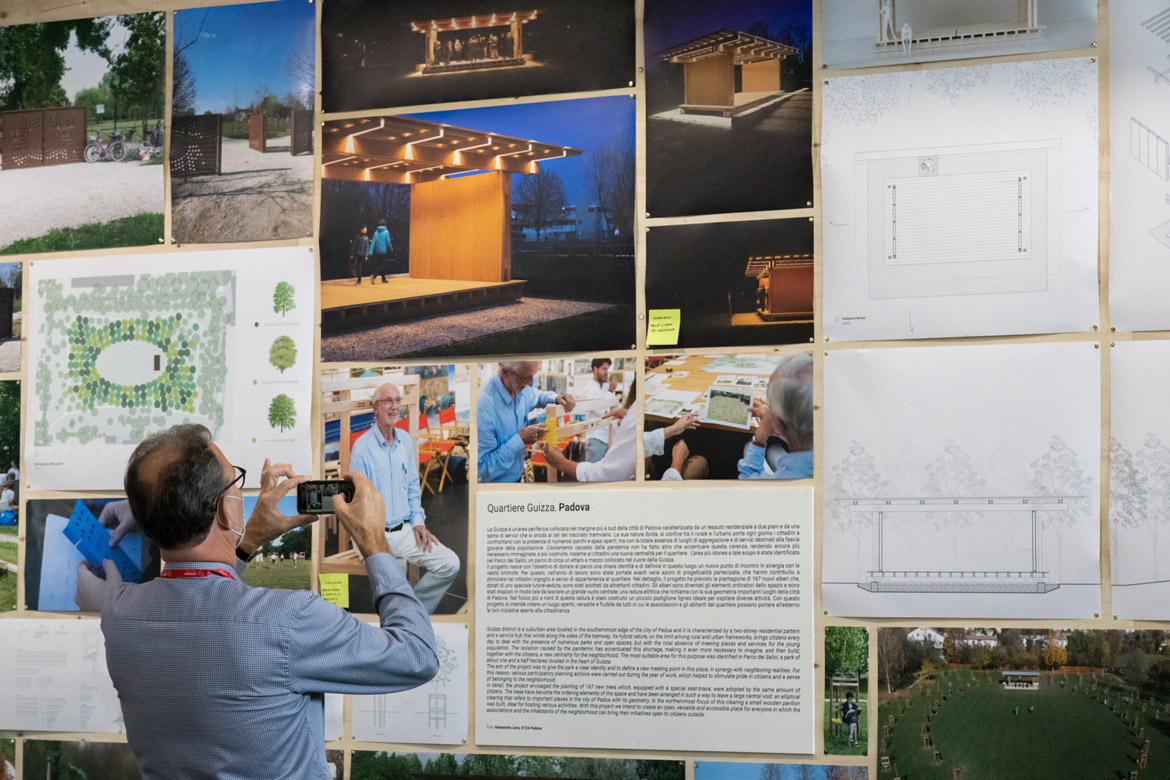 Edoardo Narne outlined the origins of the G124 Project and its development over the following seven years and illustrated the various projects and their implementation. “Giving tangible form to small but real projects” is the aim of the annual programme and, as Renzo Piano said in a short interview that was aired during the conference, “They are drops, but when there are a lot of them… And we intend to continue for life.”

Edoardo Narne also explained how Stefano Mancuso and Edoardo Tresoldi came to be involved in the G124 project. “Reflecting on the theme of open spaces and reforestation, of the dialogue between neighbourhoods and artistic beauty, art and nature, Renzo Piano combined suburbs and greenery in the 2019-2020 project. These are themes they both care passionately about.”

In his talk on the subject of global warming, “the biggest problem humanity has ever faced in the course of its history”, Stefano Mancuso explained that the last 50 years have brought about a “complete transformation in the way people live in cities: today 80% of people live in cities and 20% in rural areas, leading to a huge biological imbalance. Cities represent an assault on the environment and need to be radically redesigned.”

“We must reimagine cities in a completely different way, and the work of architects is essential for achieving this,” Mancuso continued, arguing that it is this sharp separation between cities and the surrounding natural environment that is the root cause of the processes we are witnessing today. “Cities should be completely covered with plants; plants should be everywhere. This would bring untold benefits for human beings.”

“I believe art is one of the most powerful tools we have for communicating and spreading the idea of allowing nature to penetrate inside buildings,” said Stefano Mancuso in his introduction to the work of Edoardo Tresoldi, the artist behind the “Hora” installation in Parco XXII Aprile in Modena.

In his talk, Tresoldi explained that he feels it is “important to establish an affective relationship with things, to re-educate our sensibility towards things and the places in which we live”. Driven by his interest in phenomenology, he intends to create an artistic and emotional experience in which human beings are prevented from acting and intervening in space. He believes that nature should be allowed to take its course within the works of mankind. Unfortunately, this is the opposite of what we normally do.

Tresoldi invites us to “try to look at things in a new light, to redefine relationships and… see what happens”.

Speaking via a video link, Andrea Sciascia, professor of Architectural and Urban Composition at the University of Palermo, concluded the meeting with a description of the recently completed project in Palermo’s ZEN neighbourhood and emphasised the potential of these projects. “The importance of these interventions is not in their scale but in their capacity for transformation and a change of perspective: the three G124 Project interventions carried out in 2020 hint at this possibility.” 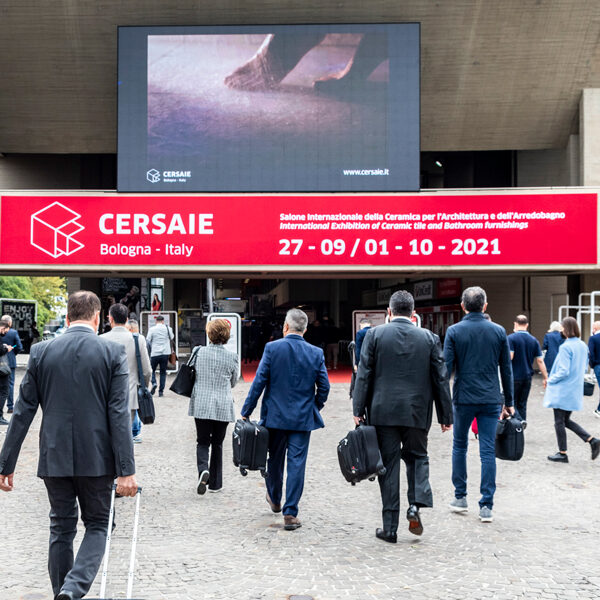 Safe participation was ensured by the Green Pass. The exhibition offered an extensive programme of cultural initiatives and events. The Contract Hall and Cersaie Digital were the new features of this year's show.