An encouraging outlook for the world building industry | by Giuseppe Schirone

The Confindustria Ceramica-Prometeia forecasting report for November/December 2017 paints an encouraging overall picture for the world building industry. Despite a slight slowdown compared to the above 4% growth recorded in 2016, global investments in residential building are expected to remain buoyant over the two-year period 2017-2018 with a CAGR of around 3.5%, largely driven by Asia, NAFTA and the MENA (Middle East and North Africa) region. This makes for an equally positive outlook for world ceramic tile demand, with global consumption expected to grow at an annual rate higher than 4%.

The final months of 2017 brought no changes in the main world markets or macroeconomic drivers capable of significantly altering these scenarios. In the forecasts published in the December 2017 report, it was only when the forecast horizon was extended to 2019 that any risk was observed of the world residential building growth rate (and consequently growth in ceramic tile demand) falling below 3%.

As for traditional markets (NAFTA and Western Europe, which account for around half of total investments), 2017 brought booming results in Western Europe, where the 5.3% preliminary growth results exceeded the previous year’s already positive growth and marked the best performance since 1990. This highly favourable situation, largely driven by the contributions of Germany, France and Spain, was able to offset the sudden and unexpected slowdown in the other traditional market for ceramic tiles, the USA (+1.2% estimated growth at the end of 2017), where from the second quarter of 2017 onwards residential building fell into a mini-recession that continued until the closing months of the year. This gap between Western Europe and the United States is expected to narrow in 2018 and then reverse direction in 2019 under the combined pressure of an anticipated slowdown in European markets (including the stagnation forecast in the UK and the slow recovery of Italy) and a predicted acceleration in the US residential building market, where the investment drivers (principally demographics) are expected to bring growth rates back in line with their potential.

In new markets, the 2017 preliminary results point to a higher than expected growth rate of well above 4% both in Central and Eastern Europe and in the Far East. In Central and Eastern Europe, this trend is a combined result of the strong performance of residential building investments in the Czech Republic, Hungary and Turkey and the fact that the crisis is nearing its end in Russia, where housing starts have begun to pick up. The slowdown in investments in the Far East has been less dramatic than expected, although the policy interventions made by the governments of India (demonetisation and tax reform) and China (credit slowdown) have led to a reduction in residential investment growth compared to the +4.8% recorded in 2016.

In the other three “emerging” areas monitored by the report (Gulf states, MENA and Latin America), the estimates for 2017 have been revised down. The biggest downward shift was in the Gulf region (which is estimated to have closed the year at +3.3% compared to the previous forecast of above 4%), due to the disappointing economic news in Saudi Arabia.

In the two-year period 2018-2019, all emerging areas are expected to continue to make positive contributions to world residential investments, although only the Gulf region and Latin America (as well as the “rest of the world” area) are expected to see an acceleration. In all other geographical regions analysed, in particular Central and Eastern Europe, the Far East and MENA, the situation is expected to be one of consolidation.

As noted above, the recent months’ economic news has confirmed the construction outlook described prior to the summer, with world residential building expected to continue to grow at a slower overall rate but with a more widespread geographical distribution.

The prospects for growth in world tile demand have likewise been substantially confirmed. The anticipated average annual growth in residential building of around 3% is expected to drive expansion in global ceramic tile consumption at an annual rate of 3.2%. This corresponds approximately to an additional 855 million square metres over the two-year period 2018-2019 (including 61% in Asian markets), raising global consumption to almost 14 billion square metres.

Barring significant unexpected changes in the strategies of the leading world ceramic tile suppliers, 72% of this marginal demand will be met by manufacturers located in the same areas as consumption. The remaining 28% (around 240 million square metres) will drive an international import/export market that is expected to reach almost 3 billion square metres by the end of 2019. 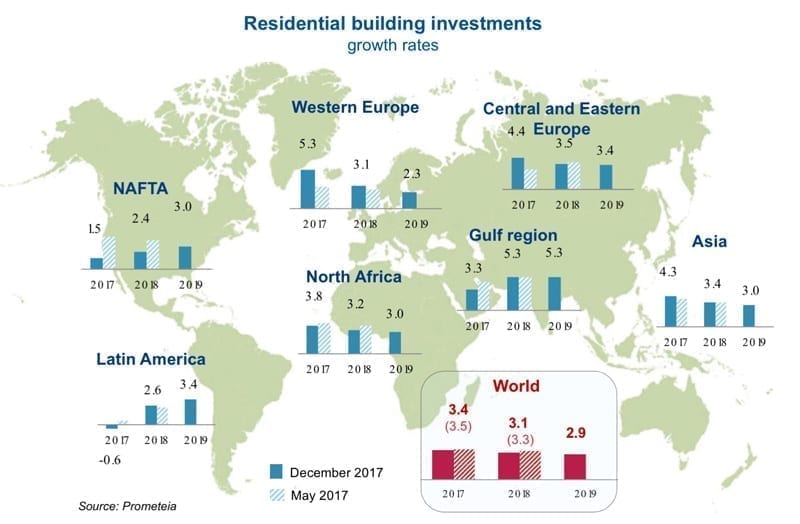 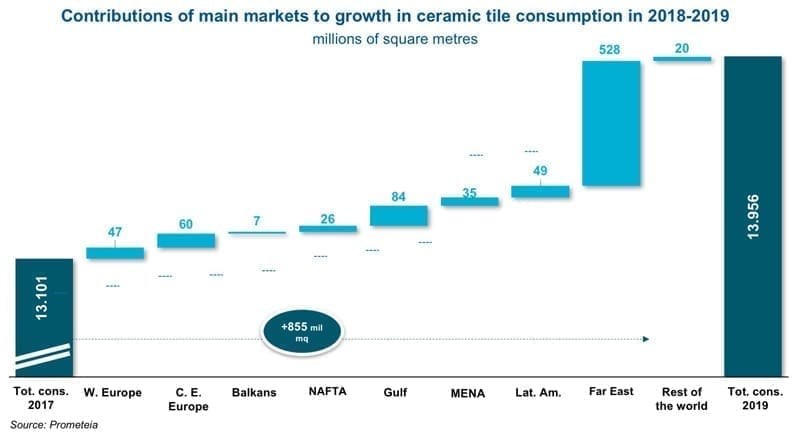