Soft landing ahead | by Luca Agolini and Federico Ferrari, Prometeia

The world economy is experiencing a slowdown that is expected to continue through 2019-2020, with annual average GDP growth slackening to 3.2% compared to the 3.7% maintained over the previous two years. The main factor behind this deceleration is the impact of protectionist policies on international trade and consequently on companies’ investment plans, including the effects of tariffs that are already in place and the uncertainty surrounding future trade. Even if these trade tensions, especially those between the United States and China, do not lead to a fully-blown trade war, they may not be resolved rapidly, in which case the climate of uncertainty is likely to continue for some time. Further risk factors contributing to the slowdown in the world economy include the uncertainty surrounding the Brexit process, the cooling of the Chinese economy and difficulties in a number of emerging markets. Taking a closer look at the main world economies, the United States is expected to see its annual average GDP growth rate drop to 2.2% in 2019-2020 compared to the almost 3% of 2018, while the EMU region will struggle with a less favourable international backdrop and continued domestic uncertainty, causing growth to slow to an annual average of 1.4% compared to the 1.8% of 2018. China is expected to see a gradual shift towards slower growth, with policymakers pledging more support for the economy to avert a hard landing. 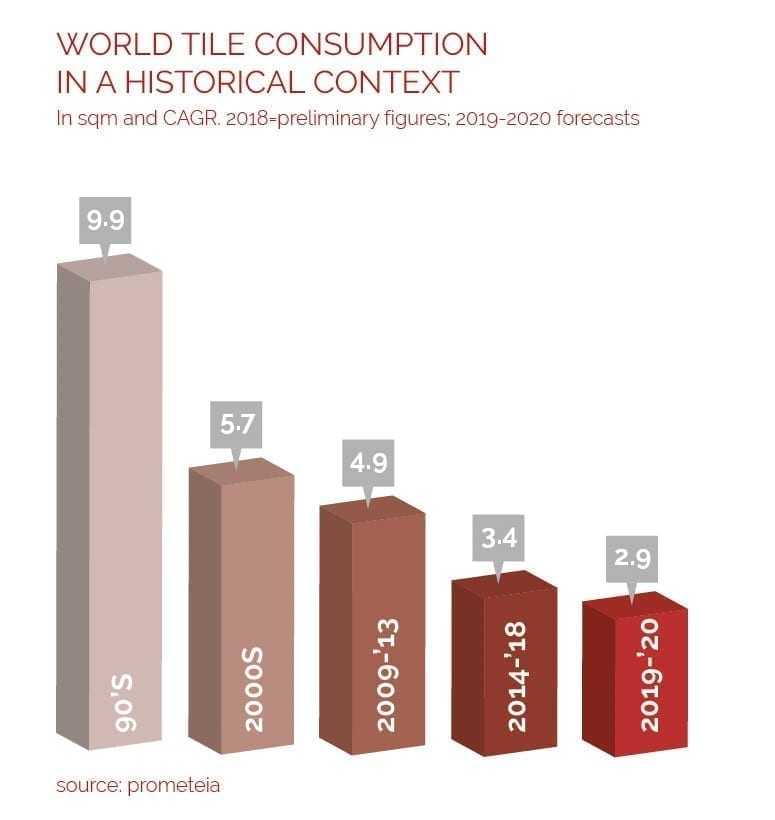 In this scenario, the expansionary phase of the residential building sector began losing steam in 2018. According to preliminary estimates, growth in global investments dropped to 1.7% last year compared to the previous year’s 3.8%. In 2019, investments are expected to continue to grow at a similar pace (1.8%), returning to a more sustainable growth rate (2.4%) in 2020. Naturally this aggregate picture reflects a range of different situations in individual areas and countries. Amongst the traditional export markets for ceramic tile, residential building in the United States is expected to remain essentially stagnant in 2019, followed by a moderate recovery in 2020. Growth in supply continues to be constrained by a lack of skilled labour and building space, while further factors such as higher mortgage rates are dampening housing demand. The trend towards more moderate investment growth will continue in all Western European markets with the exception of France, which is expected to see a gradual recovery in 2020.

As for newly emerging markets, the Gulf region and North Africa-Middle East are expected to show the highest growth rates (3.7% and 3.6%, respectively), while the Far East will see slower growth (2.7%). Within this latter region, India, Indonesia and other Southeast Asian economies will continue to register the best performances, partly compensating for the expected slowdown in building activity in China. However, the Chinese housing market appears unlikely to see a sharp decline, as housing demand continues to be driven by the steady growth in household incomes and the ongoing process of urbanisation. Investments in Latin America are expected to return to positive territory, boosted in particular by the recovery of the Brazilian market. By contrast, Central and Eastern Europe will experience a slowdown driven by the decline in building activity in Turkey, where all sectors (and especially housing) will be affected by the financial crisis. The slowdown may be partly mitigated by clear signs of a recovery in the Russian building industry. 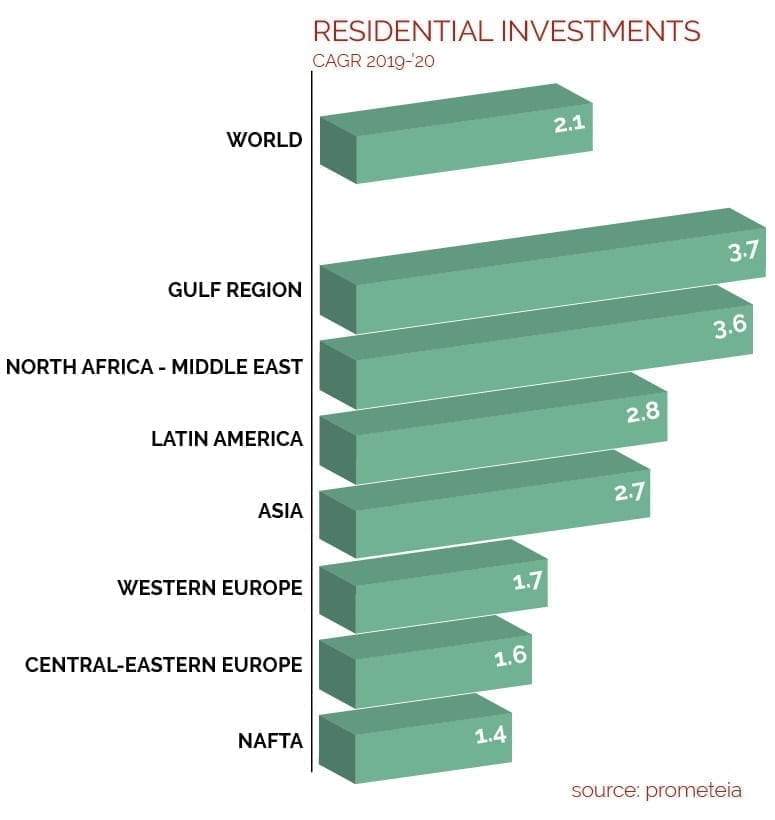 Given the prospects for only a modest expansion in global housing investments, it appears unlikely that world tile consumption will see significant acceleration over the two-year period 2019-2020 following the slowdown in 2018 (estimated growth just over 3%). But again, this aggregate figure reflects different results in different geographical areas.

Looking in detail at the main advanced economies, no significant growth is expected in Western Europe, where tile consumption is expected to maintain only modest expansion in 2019-2020 (average +1.7% over the two-year period). The NAFTA region may see stronger growth rates (+3.4%), albeit almost 2 percentage points below the average of the previous five years, with the gradual decline in the USA offset by the expected growth in the Mexican market. But the outlook for emerging markets closer to Italy is more varied. The lacklustre performance of Eastern Europe, aggravated by the anticipated slowdown in the Turkish market, will be counterbalanced by the more dynamic performance of the Gulf region, where Saudi Arabia may gradually see consumption pick up after two years of sharp contraction. However, it is the North Africa – Middle East region that appears likely to be the most dynamic of all the monitored regions, with average growth in consumption expected to hit more than 4% in 2019-2020, largely due to the contribution of Egypt.

In the more distant geographic regions, a moderate recovery is expected in the South American market as Brazil’s tile consumption returns to positive territory. By contrast, the Asian market is expected to see a gradual slowdown, with the higher growth in Indonesia and above all India insufficient to compensate for the gradual slowdown in China (which accounts for around 70% and 45% of Asian and world tile demand, respectively). For this reason, consumption in the Far East may grow at an average rate of 3.2% in the two-year forecasting period, 3 tenths of a point higher than the increase in world demand over the same period (+2.9%) but 1.5 percentage points below the region’s average growth rates between 2014 and 2018. 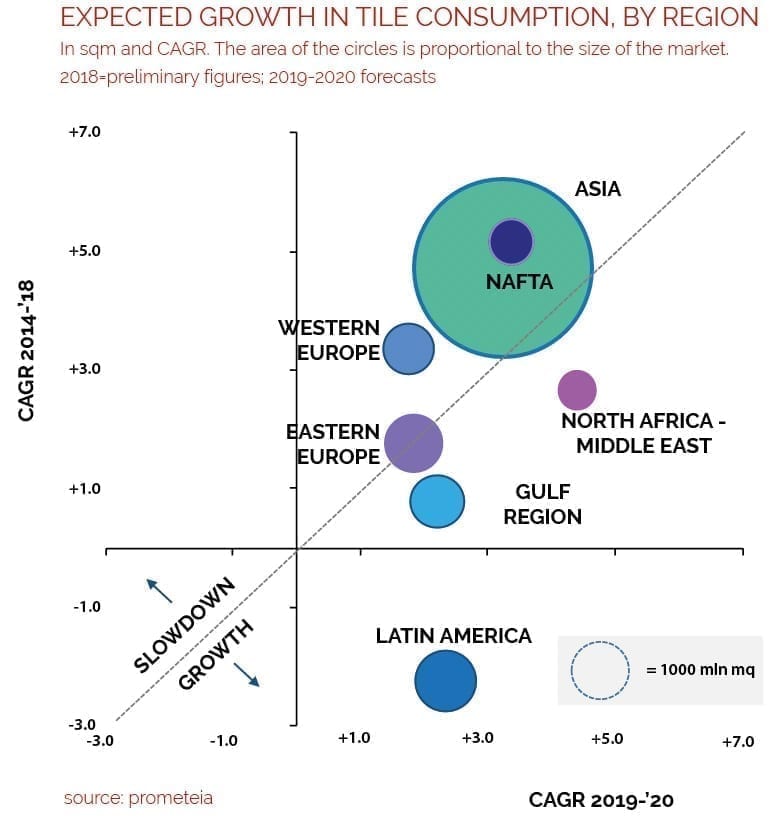 To conclude, the slowdown in growth in the world economy appears likely to impact global investments in residential building and consequently world tile consumption, albeit to varying degrees in different areas. As a combined result of the various trends, tile consumption is expected to maintain annual average growth rates of close to 3%, not far short of the 2018 figures but half a percentage point below the average growth rates observed over the last five years.