According to forecasts published by leading industry experts, the 2022 trends in the European real estate sector may include higher office and warehouse prices, lower demand for city centre homes and strong overall growth in property values. While London and Germany will be the most popular locations for global investors, there is a risk of a bubble in the most dynamic markets (Moscow and Stockholm), although this is not expected to affect Milan or Paris.

The European Union’s statistical office Eurostat recently published a report showing the house price trends since 2010 in all member countries. The picture that emerges is one of overall growth, albeit with a few exceptions. An analysis of the data shows that house prices experienced a growth phase from 2010 to 2011, which came to an abrupt halt in the second quarter of 2011. This was followed by a downward trend that continued until the first quarter of 2013 and then a situation of substantial stability for a couple of years. In early 2015, house prices resumed their steady growth, as evidenced by the 7.3% increase between the second quarter of 2020 and the first quarter of 2021. Prices rose on average by 34% between 2010 and 2021, but with significant disparities between EU countries. Estonia, Luxembourg and Hungary led the rankings with growth of 133%, 111% and 109% respectively, while the only countries experiencing a decline in prices were Greece (-28%), Italy (-13%), Cyprus (-8%) and Spain (-3%). 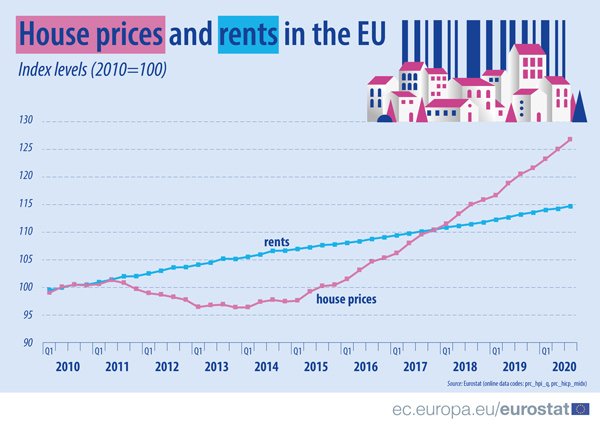 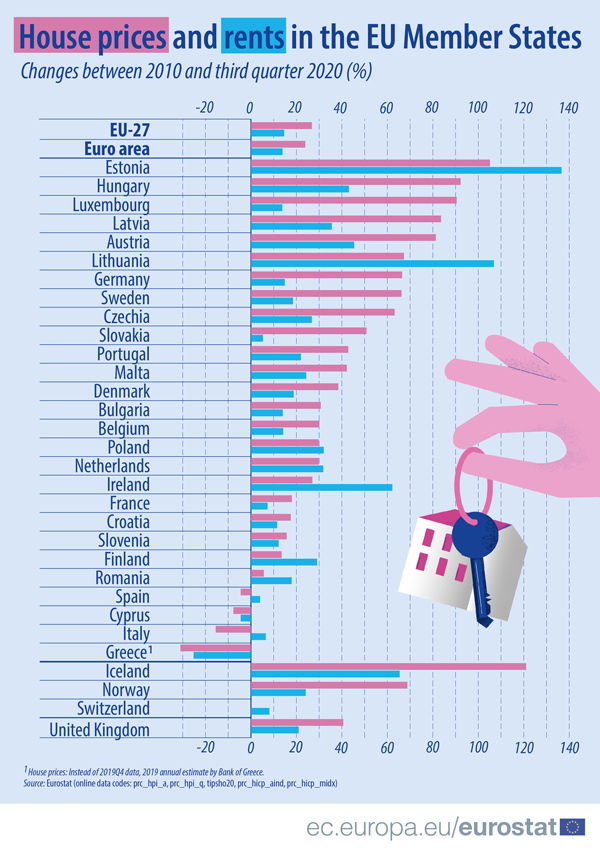 During 2021, property in prime London locations fell in value by between 2.3% and 14% while locations outside the capital and elsewhere in the country recorded increases of between 11% and 15%. The type of housing most in demand in London underwent a significant shift towards more spacious homes with gardens, while the market was badly hit by the absence of wealthy foreign buyers. However, the situation changed from March 2021 onwards; with the lifting of lockdown restrictions and the return of wealthy foreign investors, in October house prices in the city centre rose by 1.5%. A recent survey by the Urban Land Institute and PwC found London to be the most attractive European city for property investment. Rightmove also forecasts a 5% increase in 2022.
According to France’s National Institute of Statistics and Economic Studies (INSEE), the French real estate market has held up well, with increases of 5.85% up until the second quarter of 2021. Paris saw a small decline in sales (-0.2%) due to the lower demand for suburban housing, although this may be offset by demand for city centre properties on the part of foreign investors. Between 2015 and 2020, house prices in Paris jumped by 30%. The small correction seen in the last year would appear to be a consequence of the strong growth in previous years. 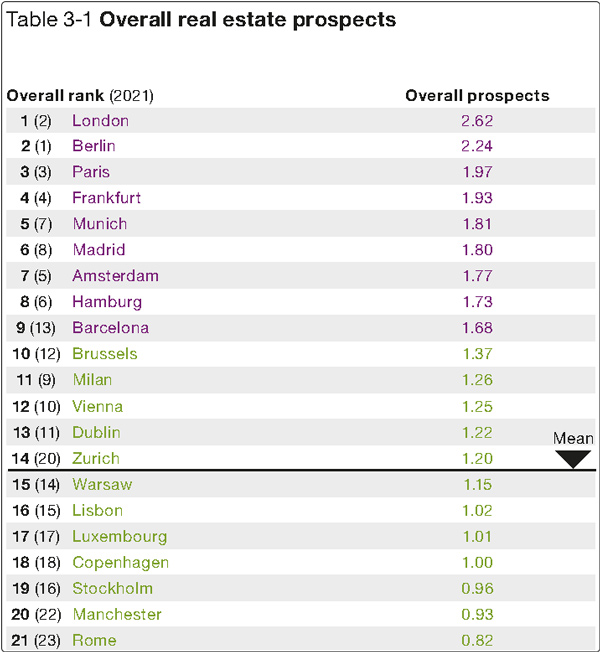 The outlook in Europe

According to the European Outlook 2022 published by Scenari Immobiliari last autumn, the 2020 downturn is already a distant memory. According to the report, all the major European real estate markets closed 2021 on a positive note and are set to achieve even better results in 2022. The total volume of real estate investments in Europe had already reached more than €100 billion by the end of the first half of 2021. This was slightly less than in the same period in 2020, but was followed by a sharp upturn in activity during the following quarter. Real estate investments in the EMEA region (Europe, Middle East and Africa) were expected to reach around €250-260 billion by the end of 2021, an increase of 8-10% compared to 2020, and the situation is expected to improve further in 2022. According to Scenari Immobiliari’s Outlook, this year will see further growth with investment volumes expected to exceed €280 billion, not far short of the record 2019 figure of almost €300 billion. The recovery in the real estate sector is demonstrated most clearly by the strong percentage growth in turnover observed in individual European countries. The average increase compared to 2020 recorded in the five largest countries (Italy, Germany, France, Spain, UK) stood at almost 10%. These positive figures suggest that the recovery will continue to gain momentum in 2022, when the average growth of the five top countries is expected to exceed 15%. As for specific variations within the European residential sector, the German market is extremely buoyant with sales projected to increase by 12.7% in 2021 followed by a further 9% in 2022. The UK is also expected to see significant growth in property sales with an 18% upturn compared to 2020 and further 10% growth in 2022. Considering only the EMEA region, France is the country that saw the biggest year-on-year growth in 2021 (+14.6%). Italy too closed out 2021 with an estimated 11% increase in sales compared to 2020 and positive projections for 2022, with the Outlook predicting 8.3% growth in house sales next year. The only country not to end the year with double-digit growth is Spain, although house sales at the end of 2021 remained in positive territory at +7.8%. The outlook for the real estate market in 2022 is therefore positive overall, with forecasts particularly rosy for the residential sector. And if the pandemic situation improves, the consequent economic upturn may lead to better-than-expected results.

The UBS Global Real Estate Bubble Index 2021, an annual study conducted by the UBS Global Wealth Management’s Chief Investment Office, indicates that bubble risk has increased on average during the past year, as has the potential severity of a price correction in many cities tracked by the index. House price growth in the cities analysed accelerated to 6% in inflation-adjusted terms from mid-2020 to mid-2021. All but four cities – Milan, Paris, New York, and San Francisco – saw their house prices increase. Double-digit growth was even recorded in five cities: Moscow, Stockholm, and the cities around the Pacific, Sydney, Tokyo, and Vancouver. A confluence of special circumstances has sparked this price bonanza. Claudio Saputelli, Head of Real Estate at UBS Global Wealth Management’s Chief Investment Office, explained: “Predominantly, the coronavirus pandemic has trapped many people within the confines of their own four walls, amplifying the importance of living space, and leading to a higher willingness to pay for housing.”

City centres in decline and a boom in non-urban areas

In recent years, life in cities has seen a significant change for the worse. Due to lockdowns, economic activity has spread outward from city centres to their (sometimes distant) suburbs and satellites—and so has housing demand along with it. Consequently, for the first time since the early 1990s, housing prices in non-urban areas have increased faster than in cities with respect to mid-2020. While some effects may be transitory, this reversal weakens the case for quasi-guaranteed house price appreciation in city centres. The impact of this development will likely be even bigger in places with stagnating or shrinking populations (like most of Europe), as supply will have an easier time keeping up with demand. Matthias Holzhey, main author of the report and Head of Swiss Real Estate at UBS Global Wealth Management’s Chief Investment Office, concludes: “Overall, a long, lean spell for cities’ housing markets looks more and more probable, even if interest rates remain low.” Looking in detail at the Eurozone, imbalances remain sky-high in Frankfurt, Munich, Paris and Amsterdam. Milan and Madrid were hit relatively harder by the pandemic, so a period of sustained and healthy economic growth would be needed to trigger a housing boom in these cities. As revealed in a report by Knight Frank, the Austrian real estate market has seen robust price increases, particularly for apartments. The office sector is predicted to attract around one-third of the total cross-border capital coming into Austria in 2022, which will mainly stem from German investors. Finally, Polish offices are forecast to be in the global top 20 for cross-border capital flows, while in Russia the office sector vacancy rate will continue its downward trend as tenants face a limited choice of high-quality supply in key business locations. The bulk of office space demand will be generated by large-sized IT companies.