According to the Association of General Contractors of America, “construction is a major contributor to the U.S. economy. The industry has more than 733,000 employers with over 7 million employees and creates nearly $1.4 trillion worth of structures each year”.

The U.S. construction industry is forecast to grow by 3.5% in 2022. According to BusinessWire, in order for this forecast to materialize, the residential construction sector should continue to grow despite “the ongoing supply chain challenges, including the shortage of building materials and rising prices, lack of skilled labor and expensive land, which is adding to building costs for new homes, as well as causing project delays and boosting house price inflation”.

In the past year the residential construction sector performed exceptionally well. While for years the number of housing starts was below the historical average of 1.4-1.5 million units, in 2021 this number exceeded this average by 200-300.000 units, reaching 1.7 million units, as seen in the charts below.

At this time the construction market benefits from low mortgage rates, and a strong demand for housing, higher that the housing inventory in the market.

A chart published by the research department of the Federal Reserve Bank of San Francisco shows the increase in housing starts and the lower availability of housing stock for sale. Housing starts have recovered from a low level of about 500.000 units in the year 2009, at the bottom of the recession. It is not reasonable to forecast an increase to the record levels, over 2 million units, that preceded the recession, which were generated by an excessive amount of liquidity in the financial markets and by speculative investments. 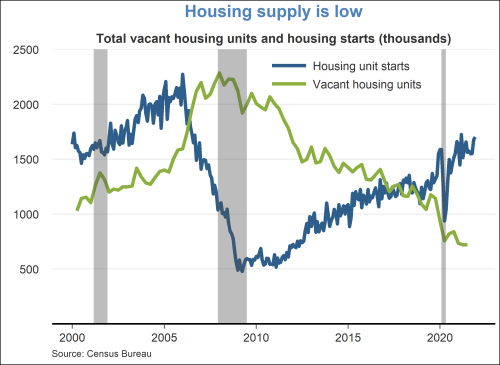 The market for existing homes

In 2021 existing home sales hit a 15 year high, due to “low borrowing rates and an intense buyer demand that are expected to keep the market hot during the first months of 2022″ reported the Wall Street Journal. The National Association of Realtors reported that existing home sales rose by 8.5% from a year earlier to 6.12 million units.

What can we expect for the future?

The main concerns for the future growth of the housing market are the recent rapid increase in interest rates and higher prices for both existing and newly constructed houses. According to the Federal Reserve Bank of St Louis interest rates for 30 year fixed mortgages rose from a low of 2.67% at the end of December 2020 to 3.55% at the end of January 2022. While this is still a historically very low level, given the high prices of housing the demand for housing is quite sensitive to any increase. The U.S. Department of Commerce reported that as of November 2021 the median selling price for a new home was $416.900, compared to $331.800 in February 2021 before the pandemic stuck. The Wall Street Journal reports that “rising material and labor costs are part of why prices have gone up so much”. There is the question of how high a price “people will be able to afford in the year ahead”. Another negative factor is the general increase in consumer prices that reached the 7% level and had undermined the purchasing power of many families.

As shown in a chart above by the Fed of San Francisco, the limited supply of available homes is met by a very high demand, so much that in many areas of the country there are “bidding wars” among prospective buyers. Demographics is also an important factor in considering the future of housing as the “Millennial Generation”, those born between the years 1981 and 1996, are settling down. In addition a very strong labor market and rising salaries and incomes promises to keep a strong demand for housing.

How all this affects the ceramic tile market?

The past year has been a very good one for many suppliers to the housing sector, including ceramic tile manufacturers. It was recently reported that Crossville’s is running its highest output in several years, operating five days a week and 24 hours a day. Florim USA announced that it will expand operations at its facility in Clarksville, Tennessee, with a $35 million investment. Other local manufacturers are also believed to have had good results in 2021. In addition the Brazilian manufacture Portobello is building a new manufacturing plant in Baxter, Tennessee, with a $80 million investment. For the ceramic tile market the near future looks bright. Hopefully it will last a few years.