Global real estate markets are on track for a robust 2018 despite intensifying economic and political risks, with investments at their highest levels for more than a decade in the first half of 2018 (a 13% increase on an annual basis to US $341 billion). A robust trend is also predicted for the coming months due to the growing number of groups increasing their allocations to real estate thanks to its defensive qualities. As a result, global investment in commercial real estate over the full year is expected to broadly match 2017 levels at around US $715 billion, despite the supply of product coming to market remaining limited relative to the previous year. This is the picture that emerges from the report entitled “Global Market Perspective” published in August 2018 by Jones Lang Lasalle, the Chicago-based real estate investment management company which monitors world real estate health and scenarios on a quarterly basis through its network of 70,000 professionals across 80 countries. 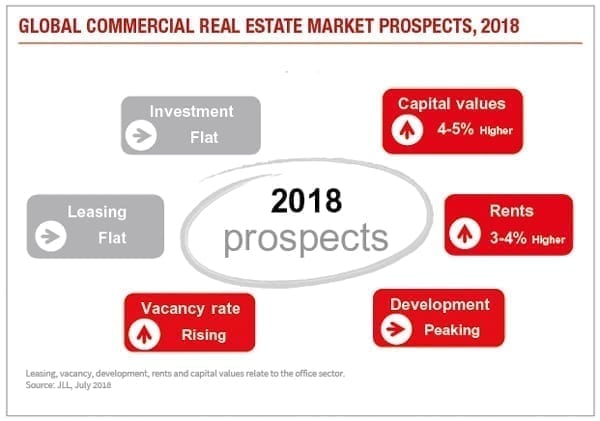 The Americas and EMEA remain the two most important regions for real estate, both with average growth rates of 9% in the first half of 2018 and volumes of around US $130 billion, but with very mixed performances within the regions (+11% USA and -78% Brazil; +60% France and -30% Spain; +23% Germany and -14% Italy). As a consequence, the driver of global real estate from now to the end of the year will be the Asia-Pacific region, which after achieving 29% growth in the first half of the year (US $81 billion of investments) is expected to guarantee 15% full-year growth.

Q2 2018 saw the highest second quarter of office leasing activity since global records began in 2007, with volumes 15% higher than a year ago, driven by demand for healthier and high-quality workspaces. Asia Pacific witnessed the sharpest rise in activity, up an impressive 45% year-on-year in Q2 2018, to hit 2 million square metres for the first time (out of the 11.3 million square metres across the 96 markets analysed by JLL). The European office leasing markets also broke a Q2 record with levels 5% higher than a year ago (led by Paris, London and Moscow), while gross leasing volumes in the US were up 14%, despite a cooling in net absorption. The global office vacancy rate dropped to a new cyclical low of 11.5% in Q2 2018, 20 bps beneath the Q1 rate, with rates even lower in Europe (6.7%) and Asia Pacific (10.6%), while remaining unchanged in the Americas at 14.8%. With the global office development cycle expected to deliver 17.8 million square metres this year, the global vacancy rate is predicted to edge higher to just under 12% by the end of the year. Rental growth for prime offices has remained steady within the 3%-4% range since the beginning of 2017. The top performances are expected to be in Singapore, Sydney, Toronto and Sao Paulo. Only a few major markets with large supply pipelines are expected to show rental corrections for the full year, notably Jakarta and Mexico City. 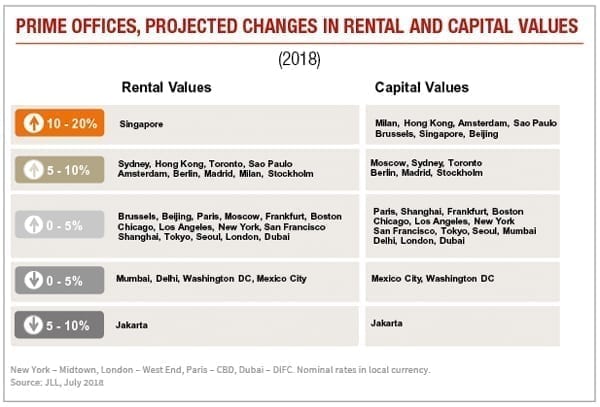 Retailer demand remains selective and directed towards existing stronger-performing stores in many markets, as various traditional retailers continue to downsize store portfolios. This is leading landlords to look for new ways to differentiate themselves, while also opening opportunities for some smaller retailers to expand into newly vacated space. Conversely, healthy hotel operating performance, combined with growing demand for travel, paint a positive outlook for the hotel industry. Global hotel transaction volumes during the first half of 2018 totalled US $29.2 billion, a 5% increase on last year’s H1 activity. North American investors were the largest purchaser of international hotel real estate, with the majority of their investment directed towards Europe.

The global residential market also remains robust. US multifamily rental fundamentals continued to be held back from any major movements. Despite the added supply, vacancy levels held steady at 5.2% and rental rates continued to appreciate, climbing 2.4% over the past 12 months. With elevated deliveries expected through mid-2019, significant increases in rental growth will remain constricted throughout the coming year. US single-family home prices are continuing to increase. Institutional investor demand remains robust in Europe, with above-average transaction activity over the first half of the year in Germany and the Netherlands. Despite subdued price growth due to ongoing Brexit uncertainty, the UK investment market also remains active and is on track for record volumes in 2018. In Asia Pacific, government tightening measures were introduced in Hong Kong and Singapore in the second quarter in a bid to cool markets. In China, price caps were kept in place in Q2 for new launches in Shanghai, while developers offered more competitive prices in a bid to increase sales against a tight policy environment in Beijing. 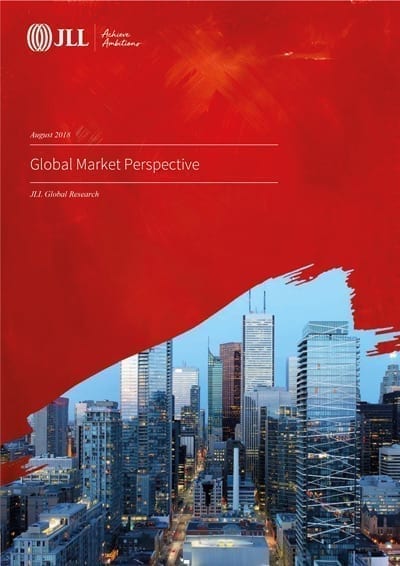