Surface deterioration or other undesirable effects may sometimes appear in ceramic tiling after installation has been completed but before the floor is put into service. These changes in appearance, which were not observed in the tiles prior to installation, are usually discovered at the time of inspection of handover of the tiling. So before the flooring is handed over to the customer and put into service, it is advisable to check that it complies with regulatory requirements and determine whether the effects actually constitute a problem with the flooring.

Surface effects can refer to any of a variety of changes in the appearance of tiling, such as alterations in colour or gloss levels, the presence of persistent stains and/or markings, dulled surfaces, chipping caused for example by falling objects, the removal of surface material and so on. These effects should be considered defects if they prevent the tiling from complying with the “regularity of appearance” requirements established by section 5 of the standard UNI 11493-1. The standard states that the appearance of tiling (including both the surface of the tiles and the joints) must be “evaluated by means of visual inspection from a minimum distance of 1.5 m and at eye level. Side lighting is not permitted. Surface effects that cannot be detected in these conditions should not be considered defects”. If the tiling does not satisfy the above criteria, the causes of the observed surface deterioration must be investigated. 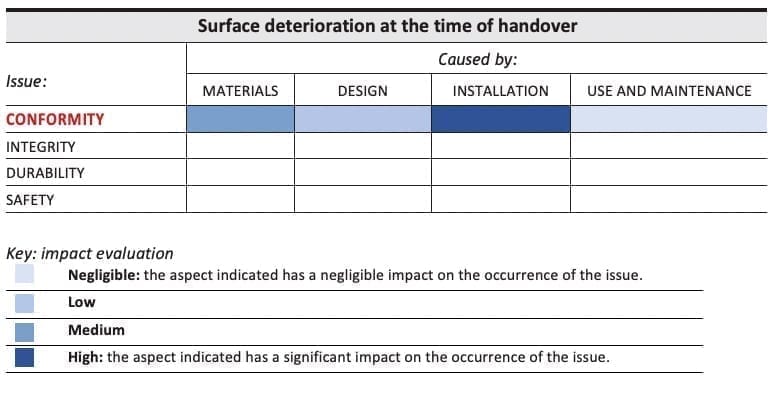 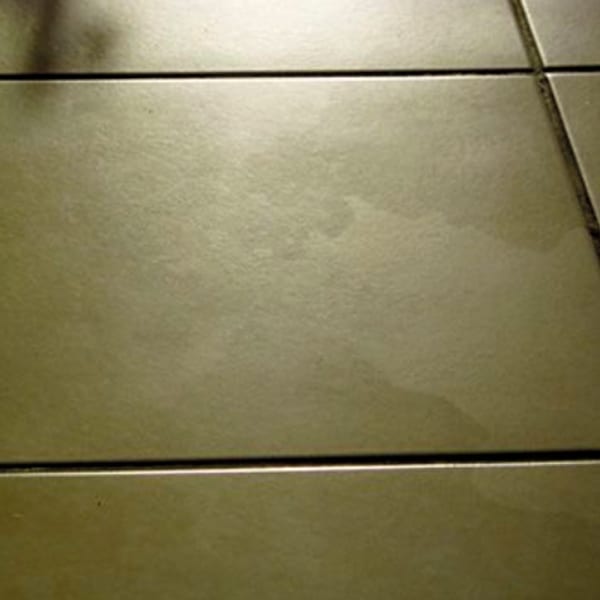 The area where the flooring is laid, the substrate and the laying pattern all have a negligible influence on the occurrence of these issues. The main causes of the problems are to be found in the materials making up the tiling, i.e. the tiles, grout and joints, and the operations of tile laying and final cleaning of the floor.

Surface effects are often caused by the use of tiles with poor acid resistance. For example, polished or lapped porcelain tiles (especially pale-coloured tiles) are particularly susceptible to changes in appearance when used with dark or strongly coloured joints. The presence of microporosity on the polished or lapped surface may facilitate the appearance of dots and stains near the joints due to grout depositing inside the pores. In most cases, the tiles undergo surface treatments in the factory to seal any open microporosity caused by surface abrasion and thereby reduce the risk of such effects. In any case, it is advisable to evaluate the technical characteristics of the tiles before they are laid so as to be able to take all necessary precautions to avoid the formation of stains. In the case of tiles with poor acid resistance, it may be advisable to use metal profiles in joints or in general to choose materials with a superior level of acid resistance.

To reduce the risk of undesirable surface effects, it is also important to study the technical specifications of the grout and the joint sealing material (whether these are pre-mixed or prepared on site), as well as the manufacturer’s preparation and installation instructions. This documentation must be supplied not only to the designer but also to the tile layer who is personally responsible for installing and cleaning the floor.

The tile layer in particular must devote special attention to the activities of grouting, cleaning up during and after installation and protecting the tiling following installation.

To avoid the risk of surface alterations occurring during grouting, paragraph 8.6 of the UNI 11493-1 standard recommends carrying out preliminary tests to check the cleanability of the ceramic tiling after contact with reactive resin grouts or materials with a contrasting colour to that of the tiles. It is also advisable to clean installation residues from the surface of the tiles continuously during grouting, so that when the operation is complete the floor will be finished and clean. It is also recommended to use suitable cleaning agents that are compatible with the chemical resistance class of the tiles. Further information on cleaning and protection of the installed floor is provided in standard UNI 11493-1, § 8.8 and § 8.9.

From the above observations, we can see that even if the individual materials making up the ceramic tiling are considered defect-free and compliant with applicable standards, it is essential to know the characteristics of the installation materials in order to avoid the risk of surface effects occurring and to be able to adopt appropriate precautions. Ultimately, the appearance of surface deterioration is attributable to poor communication between the parties involved in tiling rather than any individual player in the process.