How global bathroom renovation is changing according to Houzz

The 2017 Global Houzz Bathroom Trends Study, conducted by the world’s leading platform for home design and renovation, has revealed major changes in the way bathroom renovation projects are being carried out today.

The study, which surveyed homeowners who are in the midst of, are planning, or recently completed a bathroom renovation in 14 countries worldwide, showed that renovating a bathroom is a serious investment across the globe. Germany and Japan are the biggest-spending countries at €12,200 and €11,500 respectively, while most other countries fall into the average expenditure range of €5,000-€8,000.

This is perhaps partly explained by the fact that on average at least 16 years goes by between one facelift and another. In most of the surveyed countries, around half of the bathrooms currently undergoing renovation were last updated more than 15 years ago. Russian and Spanish homeowners are the most likely to give their bathrooms a frequent facelift, although here too a large percentage of bathrooms were last renovated at least 16 years ago (26% and 38% respectively).

But what changes are being made to the bathroom during renovation?

Contemporary is the most popular style the world over, which means not just clean, essential styling but also larger bathrooms. Japanese homeowners are the most likely to increase the size of their bathrooms (40% vs. 21%-34% in all other countries). More homeowners are also opting for larger showers, although less so in Japan and Russia (19% and 22%, respectively, compared with 42%-72% in other countries).

One of the top priorities amongst homeowners the world over is functionality. The most important criteria in bathroom renovation are ease of cleaning (from 44% in Italy to 68% in New Zealand) and good lighting (from 17% in Japan to 53% in Russia).

On a more curious note, a special mention goes to Japan for the most frequent hi-tech toilet installations (93% vs. 9%-29% in other countries) and to Spain and Germany for the most frequent curbless entry installations during shower upgrades (60% and 55% vs. 3%-39%). Italy stands out for the choice of finishings, with 75% of homeowners choosing rain or waterfall showerheads and 21% choosing a hi-tech shower. 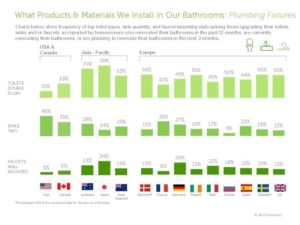 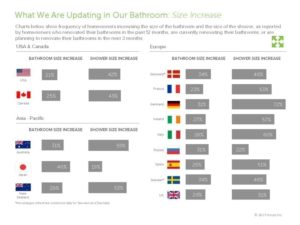 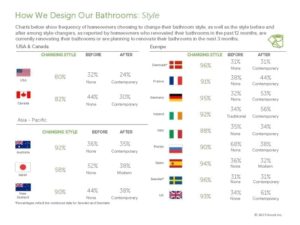 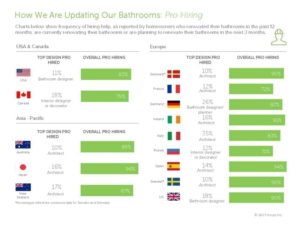