Following his experience working with Ignazio Gardella on the Esselunga supermarket projects, Carlo Alberto Maggiore continued to modernise the architectural image of these retail spaces with his design for the new Migross supermarket chain’s flagship store in Bozzolo in the province of Mantua.

Could you tell us about your experience working on the Esselunga projects and your collaboration with Ignazio Gardella?

I began working at Gardella’s practice in the early 1990s. At that time, Ignazio had been commissioned by Esselunga to give a new architectural identity to the supermarkets then under construction in northern Italy. Large commercial buildings were still an unusual area of practice for “cultured” architects.
It all began in 1989 in Alessandria with a project to regenerate an abandoned industrial site formerly occupied by the hat manufacturer Borsalino. The building programme involved the construction of housing, offices and a supermarket. Gardella saw the project as an opportunity to refresh the image of the building, replacing the existing industrial aluminium slat cladding with a more solid, distinctly architectural façade. He wanted to recreate the look of exposed brickwork, so he used a pattern of clinker tiles with staggered joints, interrupted above the entrances by a Luserna stone strip. By replicating this model with simple, controlled variations, Esselunga was able to rapidly refresh the image of its stores, improving brand recognition while at the same time introducing different architectural characteristics tailored to specific contexts. This strategy proved particularly effective in the suburbs, where these supermarket architectures have established themselves as important neighbourhood service hubs. Following in Gardella’s footsteps, over the next few years Fabio Nonis and I had the opportunity to expand the boundaries of the project to include not just the building itself but also the ancillary areas, the pedestrian spaces and walkways, and the outdoor and underground car parks which effectively constitute the entrance to the building and together make up the architectural landscape. Pursuing the goals of efficiency, accessibility, ease of orientation and visual comfort, we equipped the main functional nucleus with large glazed vestibules on the basement floors, mobile ramps illuminated by natural light, arcades and equipped pedestrian areas, green landscaped spaces and tree-lined car parks. In the first decade of the 2000s, we worked on several urban transformation projects in which the supermarket played a central role within the system of relational spaces. 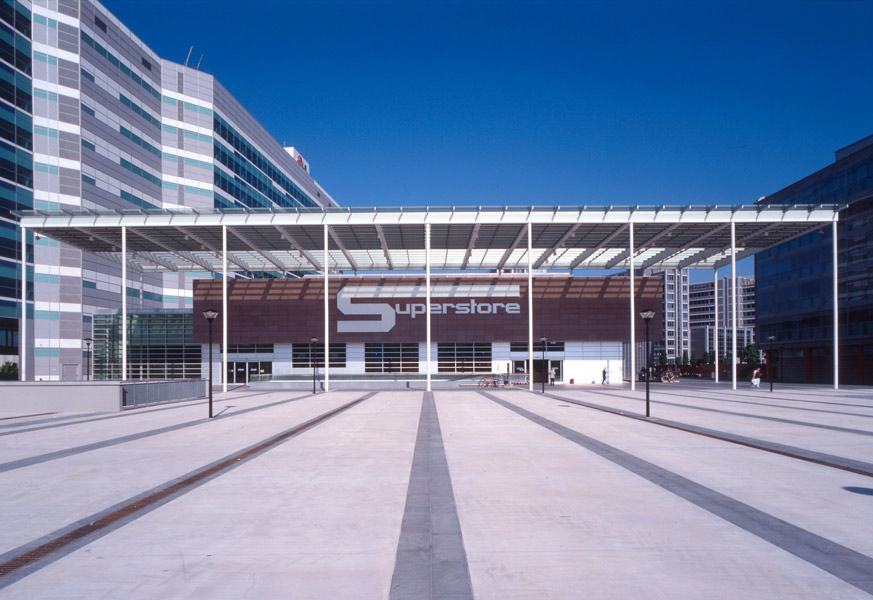 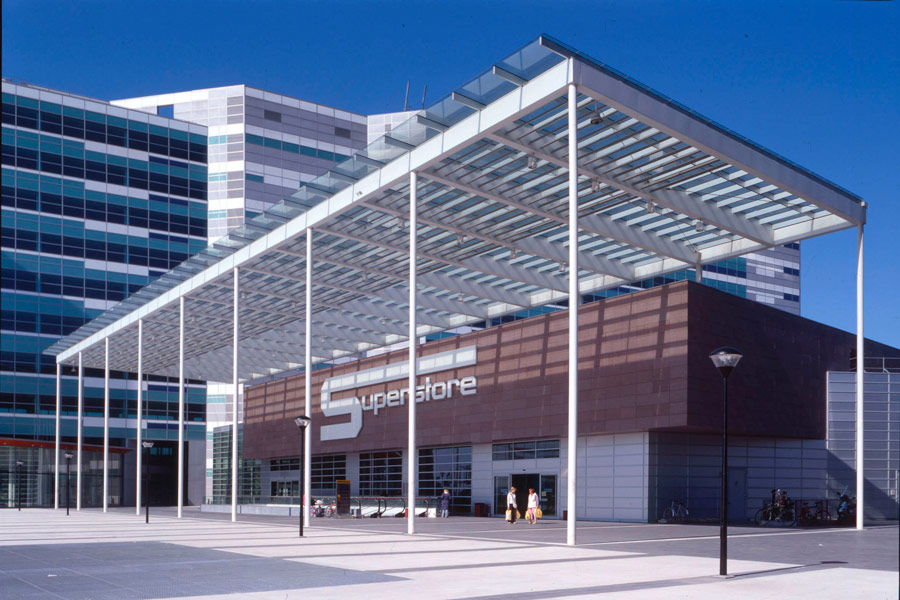 How has the supermarket typology changed over the years?

Local markets have been making a comeback in recent years. Trade has been returning to the city and reclaiming its original spaces (markets, squares, shopping streets) in a more organised way, expanding significantly and becoming an integral part of urban life. The architecture itself has also evolved and become more sophisticated. The old vernacular designs, which often turned these buildings into crude caricatures of urban spaces, are being replaced by an innovative design aimed at communicating corporate values and lending a touch of theatricality to the products on display. The envelope is becoming more transparent, the lighting warmer and the space more continuous. Visual barriers are being eliminated and the activities of the staffed service counters, once hidden away behind the scenes, are now being opened up as a kind of show that shoppers can watch through large glass windows. The interiors are taking centre stage. While technology has taken on an essential role in supporting communication, multimedia and interactivity, at the same time the new formats facilitate interaction between the sales areas and the new complementary spaces devoted to eating, smart working and entertainment designed to offer customers an increasingly comfortable and extended shopping experience.

What was the creative process behind the new Migross supermarket flagship store?

Two years ago, the Verona-based company Migross S.p.A. invited us to participate in a competition for the design of a new prototype superstore. They wanted to completely reinvent the image of their stores, which are mostly located in the Veneto region and the eastern provinces of Lombardy. It was an exciting challenge because, unlike previous experiences, we would not be limited to designing the external architecture of the building but would also work on the internal spaces and even be involved in reorganising the various store departments. This would allow us to enter an entirely new area of operation. The design work began with the heart of the building, the retail area, which also needed to be renewed in terms of its commercial offerings with the introduction of new specialised areas such as a parapharmacy, wine shop and pet store. This led us to organise the circulation routes as sequences of perspectives aimed at highlighting the most distinctive staffed counters, such as fruit and vegetables, delicatessen, and above all patisserie and the associated in-store bakery. The shopping area is accessed via a gallery illuminated by large truncated pyramidal skylights, overlooked by double-height craft shops and the Café & Bistrò, the company’s new food court format.
The first of these new superstores was built in Bozzolo, in the province of Mantua. It is a prototype that can be replicated and adapted to different contexts. The prefabricated structure with just four columns in the retail hall provides the maximum freedom in terms of layout, movement and visual perception of the spaces.

Did you use ceramic materials in the design of the exteriors and interiors?

Both inside and outside, we exploited the contrast between different but complementary materials, and ceramics played an important role in this. The building’s volume is divided visually into two parts: the retail area is clad externally with a ventilated façade consisting of large vertical panels of porcelain stoneware reproducing the characteristic texture and natural colour of Ceppo di Gré stone (Marazzi Mystone series, Ceppo di Gré effect in the colour Grey, size 75 x150 cm) installed with staggered joints on a metallic substructure, while the front volume housing the gallery and services is clad with composite wood honeycomb sunscreen profiles. Ceppo di Gré effect porcelain was also used for the interiors to give a material look to the large floor that extends throughout the various areas of the store, gallery and food court. In this case, in consultation with the client we opted for a rectified 60×60 cm size with suitable mechanical characteristics in order to guarantee the durability and flatness required for the use of shopping trolleys. The material has a soft, pleasant appearance and a colour tone that coordinates perfectly with the pale wood. To enhance the rear walls of the bakery and the food court, we used a large-format slate-effect porcelain tile, again from Marazzi’s Mystone series, while the exposed walls in the service areas are clad with glossy white 10×30 cm glazed tiles arranged in a staggered vertical pattern.

Did the coordinated graphic design serve to communicate the goals of the project?

Definitely. It was immediately obvious that several different professional figures would be needed to carry through the company’s process of modernisation and that an interdisciplinary approach to the project would be required right from the outset. We needed to rebuild the corporate identity that the company had lost over the years. So we set up a working group together with Studio Lancellotti for the graphic design and with Brand Angel Consulting for communication. Together we discussed ways of restoring the founding values of this family business which has been operating for almost fifty years in the field of food distribution and is well established in the local area, as well as the need to rethink certain practices which had resulted in inconsistent and superfluous communication and a disorderly use of space.

We realised that we needed to adopt a less-is-more approach, eliminating everything that was not strictly necessary and using a small number of simple elements to bring a sense of order and comfort to both communication and the physical space. This would make it easier for customers to move around the store while at the same time facilitating the work of the staff. The Migross rebranding project involved creating a new payoff, restyling the logo and redesigning the brand’s key physical and digital touch points. The signage and coordinated image were given a clear and essential graphic design that integrated perfectly with the interior architecture and with the distinctive lines of the brand.

Carlo Alberto Maggiore is an architect and adjunct professor of Architectural and Urban Design at the School of Architecture, Urban Planning and Construction Engineering of the Polytechnic University of Milan. After collaborating with Ignazio Gardella until 1995, he worked on the design of commercial, residential and tertiary buildings, schools and universities and on renovation projects for buildings, interiors and public spaces, initially as a partner at Nonis Maggiore Associati and later with his own practice CAM architetti. He has participated in numerous design competitions and has won a number of awards and recognitions. His professional and research activities are focused on the themes of architectural and urban regeneration at different scales and on the strategic role of architectural practice as a tool for innovation. He has written monographs, articles and essays on modern and contemporary architectural design and the reuse of urban spaces. He has coordinated and participated in several international design workshops and has been a member of selection committees for architecture and public works contracts.