Promoting peace, justice and strong institutions is goal number 16 of the UN’s 2030 Agenda for Sustainable Development, and the theme of peace will take centre stage in one of the conferences in Cersaie’s “building, dwelling, thinking” programme. At 3.00 p.m. on Wednesday 28 September in the Palazzo dei Congressi in the Bologna Exhibition Centre, architect Mario Botta will speak at a conference entitled “Building Peace” with the participation of Fulvio Irace.

The renowned Swiss architect will describe his project for a Greek Orthodox church for the Sons of Divine Providence (congregation of Don Orione) in Lviv and pay tribute to the incredible story of resilience and courage on the part of the people involved in its construction, which has continued despite the war in Ukraine. The site manager and local priest were initially forced to interrupt the project as they attended to other more urgent matters, only to resume work shortly after the outbreak of the war. The church is attached to a small monastery which was built primarily to accommodate a group of disabled young people but more recently has also served as a shelter for refugees. 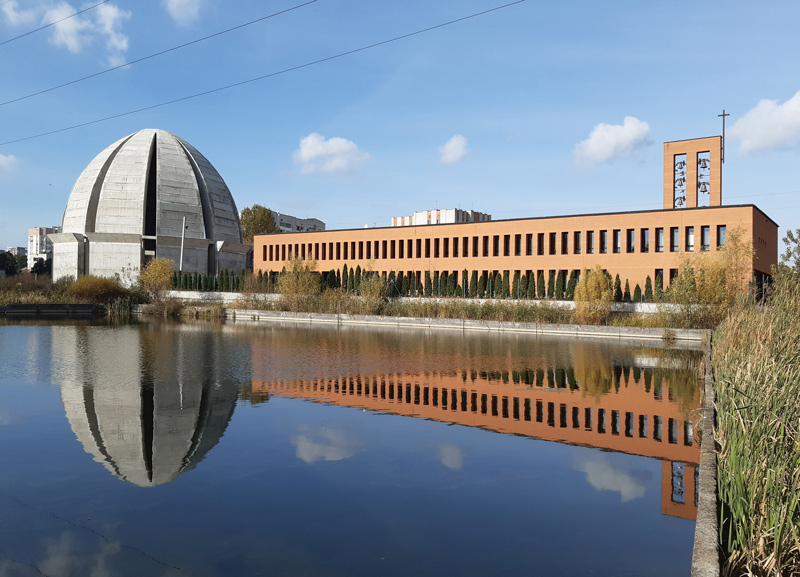 The conference given by Mario Botta at Cersaie will give participants an opportunity to discover how one of the many sustainable development goals can be pursued through architecture. As well as describing the Lviv church project, he will also discuss his belief that architecture has an ethical purpose and remains a form of resistance to immaterial society.

Mario Botta was born on 1 April 1943 in Mendrisio, Ticino. After doing an apprenticeship in Lugano, he attended the “liceo artistico” (artistic high school) in Milan and continued his studies at the University Institute of Architecture in Venice, where he graduated in 1969 under supervisors Carlo Scarpa and Giuseppe Mazzariol. During his time in Venice, he had the opportunity to meet and work with Le Corbusier and Louis I. Kahn.
After returning to Ticino in 1970, he opened his first practice in Lugano, a city where he would stay for the next forty years until moving to Mendrisio in 2011.
Throughout his career, he has always combined his architectural work with teaching and outreach activities through lectures, seminars and courses held at schools of architecture in Europe, Asia, the United States and Latin America.
When the Università della Svizzera Italiana was established in 1996, he was involved in founding the Academy of Architecture in Mendrisio, where he taught until 2018 and was granted the title of Emeritus Professor in 2019.
His work has been honoured with major international awards and numerous exhibitions. Following the construction of single-family houses in Canton Ticino, he went on to design all kinds of buildings including schools, banks, administrative centres, libraries, museums and places of worship.

His works include: the Watari-um art gallery in Tokyo; the MoMA Museum of Modern Art, San Francisco; the Cathedral of the Resurrection in Evry; the Tinguely museum in Basel; the Cymbalista Synagogue and Jewish Heritage Centre in Tel Aviv; the municipal library in Dortmund; the Dürrenmatt centre in Neuchâtel; the MART museum in Trento and Rovereto; the Kyobo tower and the Leeum museum in Seoul; the Tata Consultancy Services administrative buildings in New Delhi and Hyderabad; the church of Papa Giovanni XXIII in Seriate; renovation of La Scala Theatre in Milan and the current extension project; the Church of the Santo Volto in Turin; the Tschuggen Berg Oase wellness centre in Arosa; the Bechtler Museum in Charlotte; the former Campari headquarters and residences in Sesto San Giovanni; urban redevelopment of the former Appiani area in Treviso; the Twelve at Hengshan hotel in Shanghai; the Garnet chapel in the Zillertal, Austria; the library and museum for the Tsinghua University campus in Beijing; the Fiore di Pietra restaurant on Monte Generoso; the Architecture Theatre in Mendrisio; the Fortyseven° wellness centre in Baden; the Shrine of Our Lady of the Rosary of Namyang.

Participants in the conference are entitled to 2 professional educational credits for architects. Attendance at the exhibition itself qualifies for a further educational credit, which can be obtained by providing self-certification and uploading a copy of the ticket to the iMateria platform.