Where will the world’s real estate investments be concentrated in 2018? | by Giorgio Costa

The super-rich live in New York

New York is the dominant centre for high net worth individuals, with double the number of households earning more than US $250,000 a year compared to second-placed Los Angeles, while London ranks tenth. However, the situation is expected to change over the next five years with Jakarta and Cairo seeing the biggest increase in this income bracket. While New York continues to lead in terms of the largest annual average private investment in property, London takes top slot for diversity of demand, measured by the number of different nationalities making investments. European cities compete closely with North American hubs on this measure, with Hong Kong leading the pack in Asia. In terms of future GDP, measured at constant prices, New York again comes out on top, followed closely by Tokyo and London. Looking to the future, North American cities look set to retain their supremacy, accounting for four of the top ten cities for future GDP over the next five years.

London tops the luxury hospitality rankings with 75 five-star hotels, while Dubai’s overnight visitors were the biggest spenders with total annual expenditure of US $28.5 billion, followed by New York with US $17 billion. In terms of average overnight visitor spend, Melbourne was on top with an average of US $1,925 per person, followed closely by Dubai with US $1,917.

The Chinese city of Guangzhou led the rankings of growth in the luxury residential property market in 2017 with 27.4% growth in value, followed by Cape Town (+19.9%) and Aspen (+19%). But Amsterdam (+15%), Seoul and Frankfurt also saw strong growth. In general, luxury house prices are growing most rapidly in the Asia-Pacific region, although Europe has also performed strongly, especially in Paris and Madrid (where Latin American buyers now account for 18% of prime purchases), while Turkish and Middle Eastern buyers are active in Paris, Berlin and London. The modest fall in prices in the UK is attributable more to higher taxation than Brexit. Prices fell slightly in Zurich and Vienna, followed by Florence, Ibiza, Venice and Rio de Janeiro, while Lagos suffered the biggest decline at -25%.

It is also interesting to look at the number of square metres of prime property that can be bought with US $1 million across the world. The figure ranges from 16 sqm in Monaco (Monte Carlo) to 25 sqm in New York, 28 sqm in London, 39 sqm in Singapore, 46 sqm in Paris, 54 sqm in Shanghai, 77 sqm in Berlin, 98 sqm in Istanbul, 138 sqm in Dubai and 173 sqm in São Paulo. But which cities and residential districts are likely to perform most strongly in 2018? According to Knight Frank city wealth index 2018, Italy’s most attractive city for international purchasers is Milan, particularly its Sant’Ambrogio neighbourhood, while hot-spots in the rest of the world include the Red Mountain area in Aspen (Colorado, USA), the Potsdamer Straße, Kurfürstenstraße and Gleisdreieck streets in Berlin, the Kwun Tong district (Hong Kong), the area of Les Grands Boulevards and Bonne Nouvelle in Paris, The Hongqiao CBD (Shanghai), Thanisandra (Bangalore, India), Justicia (Madrid, Spain), Brentwood (Los Angeles, USA), Palm Jumeirah (Dubai), Paya Lebar Central (Singapore), Karen (Nairobi, Kenya), the Financial District (New York, USA), and CBD (Cape Town, South Africa). 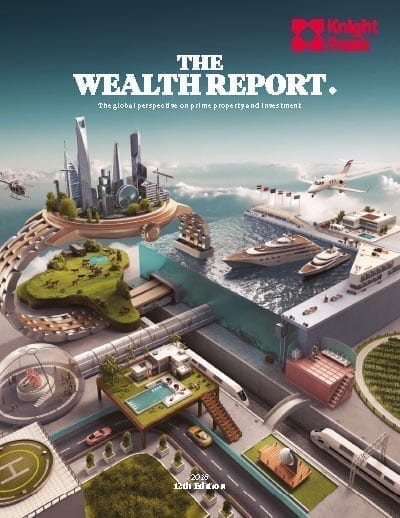