Article published in: "A contemporary ceramic art museum in Sassuolo"

Artworks that require space… empty and abandoned areas in search of a new identity… a region keen to appreciate a different side to ceramics… Hidden needs, unspoken aspirations nurtured with passion and dedication by people who believe that “dreams must be pursued to become reality”.

Driven by his love of the city of Sassuolo, System Group’s founder and chairman Franco Stefani teamed up with Studio Pincelli & Associati to launch a meticulous restoration project for the long-abandoned Cavallerizza Ducale, giving it a new lease of life and a specific cultural and social identity.

In the respectful act of restoring dignity and splendour to one of the city’s most prestigious locations – which in the period of the Duchy formed what was known as the “Delizia Estense” together with the magnificent Ducal Palace – the ancient and modern come together. The building’s centuries-old walls host ceramics as a living expression of local culture, sublime artworks created using state-of-the-art techniques and materials and modern-day industrial processes and technology. As a unique homage to Sassuolo and its citizens, these works are displayed in the city’s first permanent exhibition of contemporary ceramic art, the Bertozzi & Casoni Museum.

Housed in the ground floor hall in the Cavallerizza Ducale in Sassuolo, under an impressive two-pitch wooden roof supported by 23 trusses, the splendid creations of Giampaolo Bertozzi and Stefano Dal Monte Casoni stand out for their meticulously finished details and a high degree of technical perfection, demonstrating that art goes hand in hand with innovation. In a career spanning more than three decades, the internationally-renowned artists originating from the Romagna region have explored ceramic material as an expressive language and contemporary art form, combining their craft skills with cutting-edge industrial technologies to make the most of this material’s unique potential. 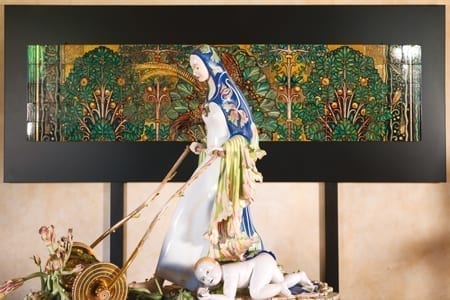 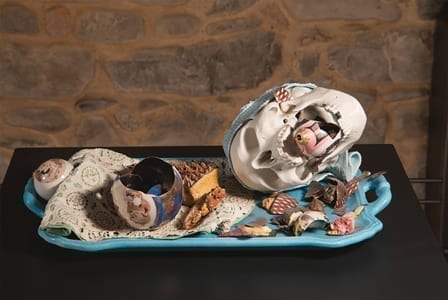 Exploiting the exceptional mimetic qualities of ceramic and its ability to reproduce the widest range of objects and materials with astonishing realism, their works create a sense of alienation and incredulity in observers, who are unable to believe what lies in front of their eyes. These representations of objects, furnishing elements, animals and relics of the past could be described as formal hyper-realism were it not for the fact that, in the process of re-composition and adaptation, all the sculptures and installations take on fresh meaning, a new expressive vitality that serves to document the vices and virtues of contemporary society. Theirs is not a universally accepted reality but an openness to different possible interpretations of everyday experience.

From the beginning of this century, the pictorial virtuosity evident in works such as Scegli il Paradiso (1997) from the painted majolica period was abandoned in favour of a more objective rendering of the chosen subjects, a powerful physical presence achieved through experimentation with advanced materials and technology. While the artists’ favoured iconographic themes of vanitas and memento mori remain much in evidence, in works such as Avanzi, Ossobello, Madonna scheletrita, Sedia elettrica con farfalle, Architettura Design and Resistenza 2 they undergo a whimsical transfiguration that moves away from an objective form and specific temporal context and helps create a surreal atmosphere. In “contemplations of the present”, the attraction to fleeting, perishable and decaying elements becomes an internationally recognised icon of a human condition that is universal and not just contemporary. 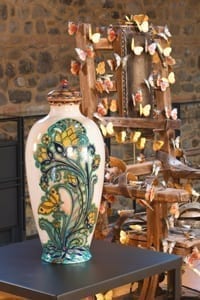 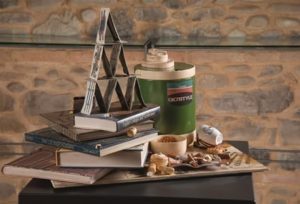 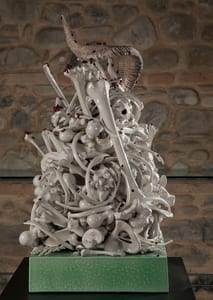 With their obsessive mimicry, the works of Bertozzi & Casoni reproduce forms that go beyond existence itself and are infused with veiled symbolism, ironic deceptions and blatant contradictions. While prompting personal reflection, at the same time they are open to dialogue and debate: “You can’t be a rebel forever, you have to accept dialogue or die,” commented the artists. This argument takes concrete form in an exhibition entitled “Galileo Chini – Dialoghi d’Arte” held at the Bertozzi & Casoni Museum, which brings together works created by different artists a century apart, revealing their evident or hidden affinities.

Held from 14 June to 14 October, the exhibition of ceramic works by Galileo Chini in dialogue with the permanent works housed in the Museum was the first in a series of temporary exhibitions of modern and contemporary artists due to be held in the Cavallerizza Ducale in Sassuolo with the aim of exploring the relationships with the aesthetic and artistic goals of Bertozzi & Casoni. “This is an innovative cultural sharing project with unwritten rules based on a dialogue between art and science, where the spaces become a privileged observatory and where ceramic material takes centre stage,” commented Franco Stefani with pride.

Rather than an end in itself, this ambitious project reaffirms Sassuolo’s enormous wealth of existing works and opportunities for dialogue, and reflects the city’s aspirations with the founding of this “new cultural venue”, which in the words of its founder, “narrates the art of doing”.