As Millennials search for homes, ownership begins to replace rental | by Giorgio Costa

Based on the correlation between GDP growth and working age population, the world’s top-ranking countries in terms of talent acquisition are India and Vietnam. Estonia and Canada are also well positioned, while Europe (with the notable exception of London) trails well behind. Bangalore, Hyderabad and Pune are set to be the fastest-growing cities in India between now and 2030, but Ho Chi Minh City and Tallinn are also performing well. These are just a few of the locations set to overtake the cities that have dominated global rankings for the past decade, namely New York, London and Tokyo, which will however continue to play an important role over the coming decade despite the surge in Asian markets, particularly India and China. Italian cities lag well behind in terms of economic growth along with their Spanish and Portuguese counterparts and even some German cities such as Dortmund and Dusseldorf.

How offices are changing

The development prospects for the world’s major cities, and consequently the map of the future growth in real estate values, have been analysed in a recent report by Cushman & Wakefield entitled “Demographic Shifts: the World in 2030”. The report also looks at the various demographic cohorts and discusses how their social positioning and incomes are likely to determine which types of cities and consequently real estate offerings will dominate the market from now to 2030. “Flexibility” is one of the key concepts that will define the future of real estate, particularly the office segment where coworking is a powerful new trend. For example, in a highly dynamic city like Sydney, coworking accounts for around 25% of the sub-350-square-metre lease market, while in New York coworking spaces make up around 15% of leases between 450 and 900 square metres. 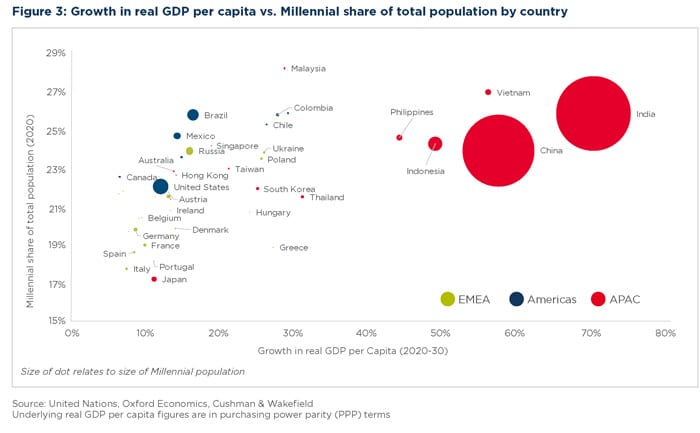 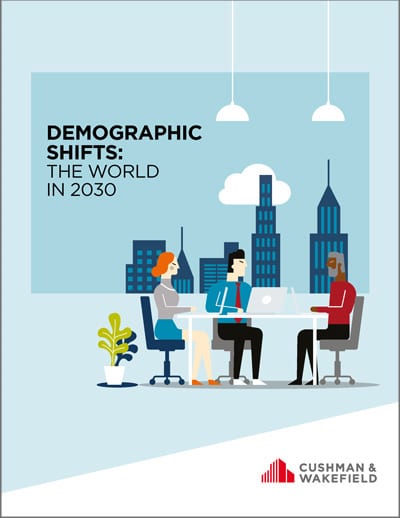 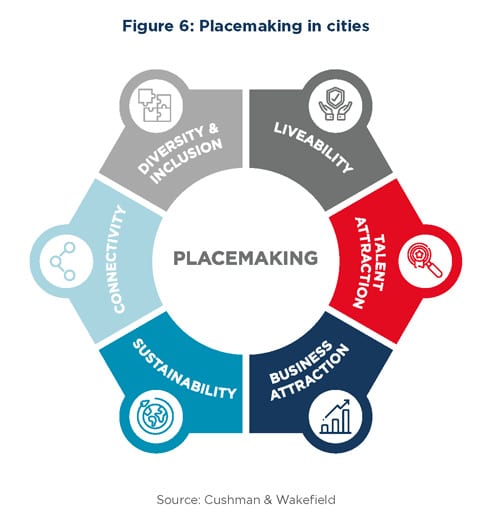 Together with coworking, another equally important trend is that of remote working. According to the Cushman & Wakefield report, 50% of Millennials (the generation born between 1981 and 1996 who make up 40% of the world’s workforce) prefer to work remotely for at least one day a week, while the other half prefer to work in a workplace full-time. In any case, for a generation that is already finding it difficult to establish a good work-life balance, the amenitization of office buildings is likely to evolve to include more food and bar concepts, gyms and fitness centres, and childcare facilities. As for housing, demand from Millennials has driven the resurgence of neglected city centre areas such as Shoreditch in London and the city of Hoboken in New Jersey (across the Hudson River from New York), as well as the central wards of Chiyoda, Minato and Chuo in Tokyo. This trend dispels the myth that this generation prefers to rent rather than purchase their own homes. Indeed, no less than 40% of Millennials own their homes and of those who don’t 80% would like to. Looking to the future, lower-cost areas that are close to urban centres and are well served by basic amenities such as transport and childcare are particularly attractive to Millennials, whose financial prospects are less rosy than those of their predecessors. Moreover, when the Baby Boomers (the generation born between 1946 and 1964) decide to downsize, this may put downward pressure on the prices of single-family homes coming back onto the market.

The impact of Generation Z

The so-called Generation Z, consisting of young people born since the year 2000, is also likely to make a major contribution to real-estate demand in coming years. Generation Z comprises two billion people worldwide, 26% of the global population, and is disproportionately located in Africa, which accounts for 23% of all Generation Z members but only 17% of the global population. This cohort has strong financial awareness while at the same time appreciating a certain level of comfort. As the first generation growing up as digital natives, they will bring this mentality into their living spaces through the choice of an increasingly high level of home automation. 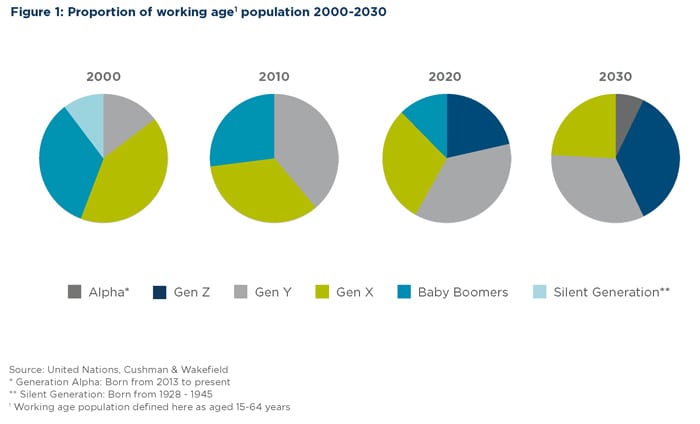