Vertical farming and neo-manufacturing: welcome to the city of the third millennium | by Barbara Benini 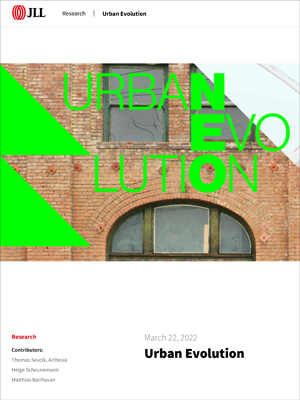 The city of the future will not be defined exclusively by urban centres, but rather the city’s full potential will lie outside the core area in the ”in-between city”, i.e. everything which is neither the city centre nor a classic green suburb. This includes infrastructure such as airports and ports, as well as large office and logistic zones. This is the view expressed in “Urban evolution”, the study by the real estate services company JLL published in March 2022 in collaboration with the strategy consultancy Arthesia, which aims to identify the directions and potential of future urban development.

The JLL study identifies two specific developments which will increasingly influence our cities and their real estate markets over the coming years: the location of manufacturing companies in the city under revised conditions, known as neo-manufacturing, and the new industrial production of food, known as vertical farming. In terms of the new paradigms of functionality and sustainability, they present interesting utilisation options which are relevant for property developers and investors.

These new use types are also extremely important for improving the supply function and for bringing value-added activities back from Asia or other European countries. Local production and supply will gain increasing importance, particularly with a view to responsible production and consumption and the creation of sustainable cities and communities, all of which fall within the UN’s sustainable development goals.

The term vertical farming describes the cultivation of plant-based or animal-based products in a multi-layer environment. Vertical farming can take place in an entire building or on individual floors of a property such as a basement or roof, both with and without natural light. The size of a vertical farm varies from micro-cultivation for supplying individual restaurants to large-scale mass production.

The harvesting efficiency of vertical farming is many times higher than that of traditional agriculture or greenhouse gardening. For some products, it can be as much as 100 times higher. This means that 1 sqm of floor space in a vertical farm can achieve the same harvest yields as 100 sqm of conventional agricultural land. To fully appreciate the opportunities, suffice it to think that Germany has a total of 50 million sqm of warehouse properties potentially available for vertical farming use and that this could meet the entire daily calorie intake of the whole German population.

Moreover, vertical farming allows for 365-day year-round production, independently of weather conditions (and consequently with zero risk of losing crops) and can take place in underground tunnels or on the 100th floor of a skyscraper. And as it is performed locally, it entirely eliminates the transport element, with all the benefits that this entails in terms of polluting emissions.

Vertical farming is therefore a new, hi-tech form of agriculture characterised by a very high level of sustainability (it requires 70% to 95% less water and 10 to 20 times less land than traditional agriculture), planning certainty, thanks to the kind of technology in use and the regular supply of water, light and nutrients which minimise the risk of disrupting production, and self-sufficiency, as it is possible to produce on a local and “domestic” level (miniature greenhouses or shelves integrated into supermarkets) and on an industrial scale.

As regards the real estate sector, vertical farming requires specially designed and built properties with specific technical and technological characteristics capable of guaranteeing the maintenance of a constant or adjustable temperature and air humidity control through an insulated building envelope.

Of course, there are still some aspects that need to be fine-tuned to allow this type of cultivation to become systematically established, such as their high electricity consumption or proper land-use planning, but there are already examples of good practice in this regard both in East Asia and in Europe. In Germany for example, the Berlin-based company infarm operates a vertical farming network across a total of 11 countries. In Germany, infarm has three large farms in Berlin-Spandau, Hanover-Langenhagen and Pfungstadt. The company’s growth targets are ambitious: by 2030, infarm intends to be operating 100 growing centres in 20 countries.

The real estate sector is an important player and collaborator in the future development of the sector. For long-term and innovative investors who have the courage to look at a wider sector mix in their respective portfolios, this type of property becomes an interesting alternative to traditional asset classes. There are interesting investment opportunities in the case of warehouses which are no longer suitable for logistic use due to their layout but which could be converted for industrial food production. Current yields are estimated in a range between 4% and 5%, which is slightly higher than those currently paid for classic logistic properties. 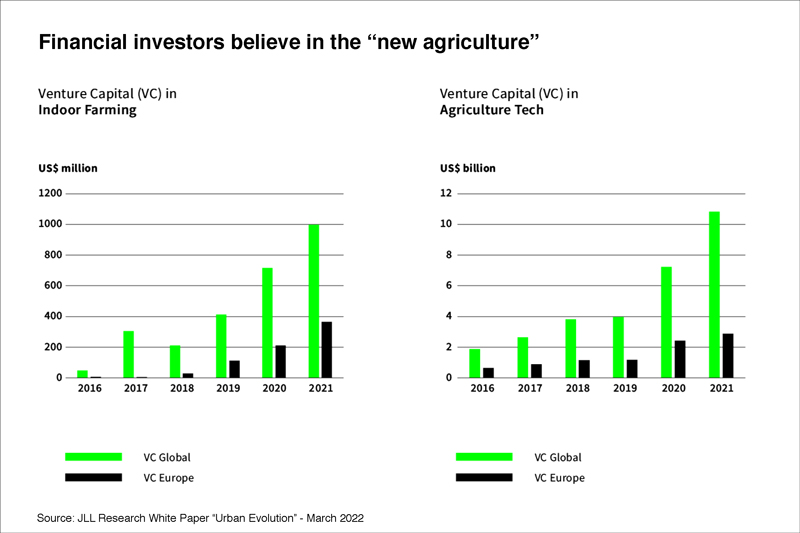 According to the JLL study, production based on Industry 4.0 and new technologies opens up attractive opportunities for the use of vacant offices and retail space.

Neo-manufacturing is urban production that uses innovative technologies and materials to manufacture individual products, mainly in small quantities, and at the same time is capable of creating an emotional connection to the place of production and the associated product image. Neo-manufacturing means that production industry is located right next to the residential areas of a city. Ultimately, neo-manufacturing applies to all companies in sectors which can be described as city-oriented, such as hi-tech, healthcare and creative industries.

Neo-manufacturing is an attractive sector for two main reasons. It brings high-level jobs outside the service and knowledge-based sectors back to the cities and it makes production in an urban setting and the resulting use of city labels an attractive proposition (a kind of local “made in” label), especially for lifestyle products such as bicycles, fashion, watches and spectacles, but also increasingly for larger products such as electric scooters or even specialised electric vehicles, and can be a clear advantage in terms of product marketing. Even the cities benefit from these labels and slogans, and companies become brand ambassadors for a city.

Neo-manufacturing is therefore also set to become a new sub-asset class in the real estate sector. The first signs of this are already emerging, as in the case of the inner-urban space leased by manufacturing companies to display their products.

In this field, the German market has great potential. There are almost 24,000 manufacturing companies with fewer than 50 employees in Germany. These companies have around 690,000 employees and more than 3,700 of them are located in an independent city or increasingly in urban districts. Within these cities, these small businesses account for 46% of all manufacturing companies.

Finally, considering companies and employees classified as belonging to “city-oriented” sectors, JLL has estimated that in Germany neo-manufacturing may involve 680,000 companies with a total of 6.7 million employees. 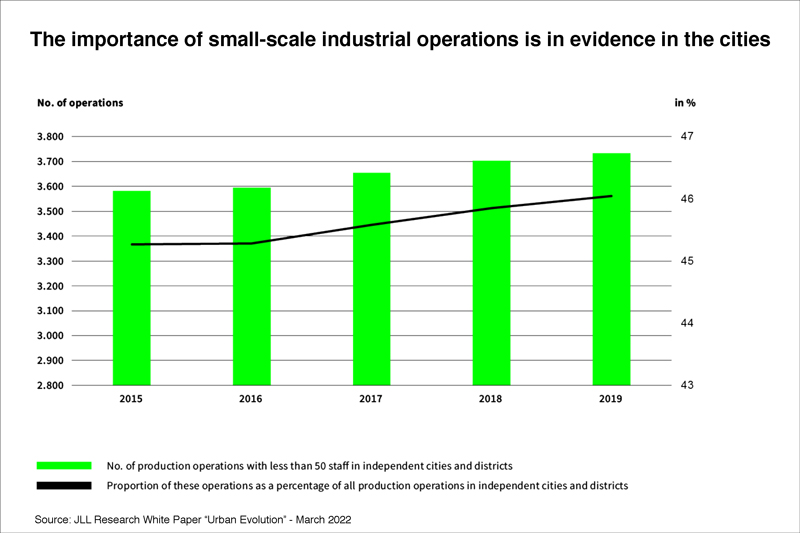 There is very high investor demand in Germany for properties that can potentially accommodate neo-manufacturing. The German real estate investment market set a new record transaction volume in 2021 with a total of over €110 billion. A new record was also achieved in the logistics segment in 2021, with over €10 billion of capital invested in production warehouses, distribution properties and light industrial units.

In conclusion, as cities now aim to become productive, inclusive and diverse places, JLL believes that the need for sustainability and the political and social drive relating to urban development will result in the emergence of a separate asset class. Over the coming years, vertical farming will gain a lot of momentum thanks to the social discussions relating to climate change in combination with agriculture. Neo-manufacturing offers the opportunity for increased integration of production industry into cities and the expansion of the functional mix.