Designed by the Japanese firm SANAA as part of a project to regenerate a site formerly occupied by a dairy collective, the new Bocconi University campus in Milan communicates with the city through a series of permeable and lightweight giant cocoons 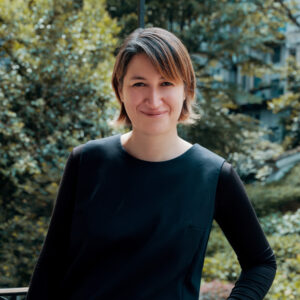 We met architect Francesca Singer for a tour of the new Bocconi University campus in Milan. Since 2011, she has been part of Tokyo-based practice SANAA / Kazuyo Sejima + Ryue Nishizawa, the firm that won a design competition launched in 2012 by the Bocconi University to redevelop the area formerly occupied by a dairy collective, the Centrale del Latte.

In keeping with its time-honoured tradition, the Milanese university once again chose outstanding architects for this latest project. The first section of the campus was designed back in 1941 by Giuseppe Pagano, then Giovanni Muzio designed the student residence and canteens (1953-1956) and later the library and main lecture hall (1962-1966). An expansion was completed in more recent years by Grafton Architects (2002-2008).

SANAA’s new project, from the various stages of the design competition through to implementation, was coordinated by Francesca Singer with the support of her young co-workers at the practice and in close cooperation with the client.

The result is stunning. The sense of equilibrium between the solids and voids of the open, lightweight new “cocoons” elicits a profound emotional response. The new collective interiors are permeable to the city and are visible from outside.

The first thing that strikes you when you look at the new Bocconi campus project is the sense of transparency, of a seamlessly uninterrupted flow. Could you tell us more about this design philosophy, which seems to me to be a key aspect of SANAA’s projects?

The basic idea was to promote direct communication between what happens inside and what happens outside, so that life inside the building would not be separated from its context but would dialogue with it. This is reflected in the design of the circulation and distribution flows, the way people enter and use the interior space. Moreover, when walking around the building you can always see through the entire space. This concept is also reflected in the distribution of the interiors, where the hierarchy is never very strict.

On the Bocconi University campus, how does SANAA interpret the concept of Nature and the ability of architecture to interact with the environment?

In the case of the Bocconi University campus, part of the land had already been designated as a park as specified in the call for tenders. SANAA’s projects establish a close relationship with the landscape, which as it changes maintains a continuous dialogue with the interior. At the Bocconi, the park is permeable and open not just to the buildings included in the project but also to the city itself. The park extends into the inner courtyards while student life inside the buildings extends outside.

Could it be said that there is an osmotic connection between the individual parts of the building as if they were the cells of an organism?

This is very evident in the Bocconi University project because the juxtaposition between the individual elements in the programme creates the idea of a continuous flow between one part and another. It was to be a large and complex project extending over three buildings, including a student residence, the offices and classrooms of the SDA School of Management and a sports centre with swimming pool that would be open for use by the public. While these applications differ in terms of type – classrooms, offices, halls, residences and sports areas – they were conceived as continuous spaces that would follow the gentle curves of the buildings in an entirely natural way.

How does the SANAA team in Milan coordinate with the studio in Japan?

For each project, someone normally travels out from SANAA’s central office in Tokyo to work directly on site and liaise with Sejima and Nishizawa in Tokyo.

So you worked with SANAA in Japan before they assigned you to the Bocconi project?

After graduating from Milan Polytechnic, I spent five years in the USA. In New York I met an architect who was working for SANAA and as a result of this contact moved to Japan in 2011 to collaborate with the office in Tokyo. So I was there by chance when Sejima and Nishizawa received the invitation to participate in the competition for the new Bocconi Campus. I stayed at the Tokyo office for five years, then returned to Italy during the execution and construction phase of the Bocconi project. For me it marked a return to Italy after a very long period abroad. I now continue to work with Sejima and Nishizawa as a partner in the practice.

Have you visited Milan with Sejima and Nishizawa?

Sejima and Nishizawa have always loved Italy and are very familiar with the country.

We toured Milan together and attempted to identify some of its distinctive features. Together we visited the courtyards of the Università Statale and the Rotonda della Besana and went to see the old Milanese “case a ballatoio”, the traditional “balcony houses” with courtyards. The Bocconi project freely interprets the idea of a portico, of the Lombardy courtyard houses and the internal gardens in the residential part of the campus.

In the Bocconi University campus project, are the formal choices related to aspects of sustainability? Does form facilitate energy saving?

The client had already made it clear in the competition brief that the construction was to be a zero-energy building and would need to achieve LEED Platinum status. So the design process followed these guidelines, which in turn determined many of the technical choices. For example, we incorporated external metal mesh to provide effective protection from sunlight. This mesh was chosen in accordance with the requirements of sustainability.

So it is not just an aesthetic gesture.

There’s nothing formalistic about it. Everything has a role, there is always a reason for every design choice. All you need to do is look at the technical details to realise that these are not gestural or self-referential solutions. The curved shape of the classrooms was designed with great precision: the width is determined by specific criteria such as the width of the seating and the corridors in relation to the façade modules, the distribution of the columns and so on. The building expands and contracts according to the internal distribution. Each glazed module corresponds to two mesh modules. All these variables have led to a highly specific layout in which nothing is random or left to chance. This results in an efficient and functional space.

The external mesh that characterises the new campus is astonishing, you simply can’t see the repetitive nature of the module.

There are several basic modules that are adapted to the curvature of the building. We started out with double or single curves, then Sejima and Nishizawa looked at how these should alternate, making many different models and mockups. The mesh has a diamond shape that is cut in the centre to ensure continuity between one panel and the next. The idea was that it should be perceived as a continuous mesh.

So an in-depth knowledge of materials is very important when making design choices. Did you use ceramic materials in this project?

Ceramic is an interesting material in terms of the frequency of the joints. Very large tiles have a smaller number of joints but are more complicated to produce and use. To create a continuous effect on curved walls the tiles need to be small, as in the case of the bathrooms on the Bocconi University campus.

Francesca Singer graduated from the Politecnico di Milano in 2005, then studied at the Yale School of Architecture (MArch II 2010). She worked for Selldorf Architects and RAMSA in New York and since 2011 has been working for SANAA / Kazuyo Sejima + Ryue Nishizawa, Tokyo. She has followed several international projects for SANAA, overseeing all phases from the design competition through to the end of construction. One of these was the Bocconi University Urban Campus project in Milan. Since 2016, she has been working as a Teaching Assistant for Sejima’s Architecture Studio at the Politecnico di Milano. In 2020 she was appointed a tutor at the Architecture Workshop of the YAC Academy in Bologna. She has been a partner at SANAA since 2021.