Building for the common good | by Alessandra Coppa

The approach to architectural design embraced by Pia Durisch and Aldo Nolli stands out for its consistency and its focus on socially useful projects, heritage preservation and city architecture. These characteristics were evident right from their very first works, from the House for a Sculptor in Mendrisio in 1998 (a radical project that involved restoring a mediaeval building to its original state by stripping away the various additions that had been made over the centuries and constructing a new reinforced concrete interior) to the project for the MaxMuseo in Chiasso (which involved transforming an old abandoned garage located opposite the Cinema Teatro in a run-down area of the town’s historic centre).

This approach dates back to 1985, when the two architects were training at Santiago Calatrava’s practice after meeting as students at the ETH in Zurich, an experience they continued at the firm of Giancarlo Durisch in Lugano and consolidated when they opened their first studio in Riva San Vitale in 1993. 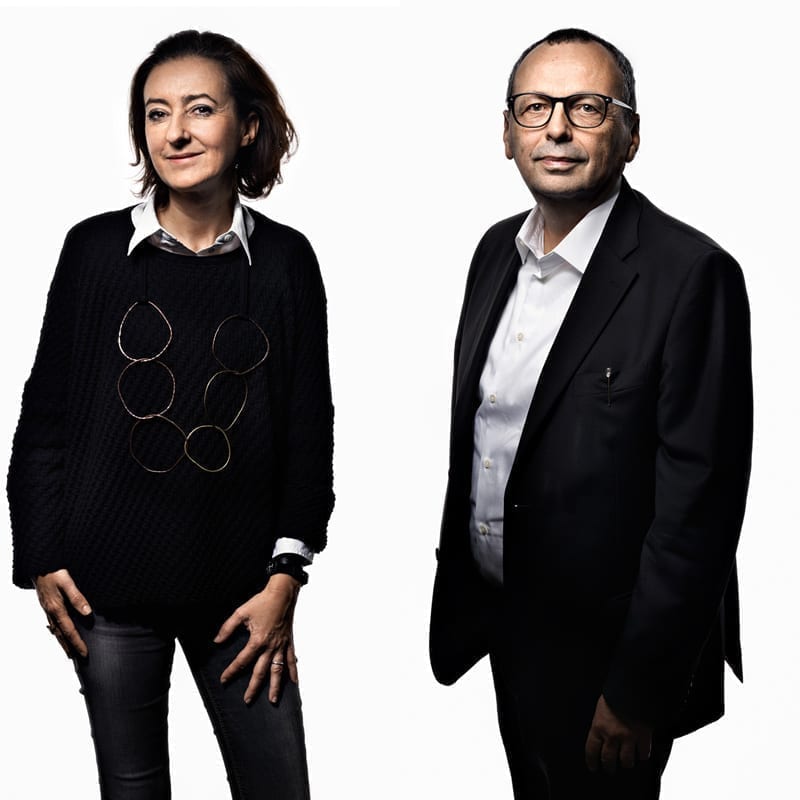 How did you come to set up your firm?

Durisch + Nolli was set up by Pia Durisch and myself as a result of a partnership that has lasted for more than 30 years. We have the same professional background and academic training and share our professional and private lives. Together we follow all the firm’s projects. We both teach, an activity we see as an opportunity for personal growth and for developing our architectural beliefs together with our students while making our professional expertise available to the younger generations. For years we have been working with professional and cultural associations, promoting competitions as merit-based tools and the diffusion of architectural culture or “Baukultur”.

What is your design philosophy?

We engage in a constant dialogue in order to achieve a greater understanding and justification of the things we do and design together. We bring together different but complementary viewpoints to create a well-balanced project and strive to deal with the essential aspects of our local area, our society and our culture. This is one of the most exciting things about the architectural profession. The idea of building something that is useful and sustainable for society is extremely rewarding and a source of great satisfaction. Contributing to the common good through socially useful projects in the belief that good architecture can improve people’s lives is one of the most important aspects of our philosophy.

Cities are the highest expression of human civilisation because they represent the desire for civil coexistence within an organised community and adopt infrastructure for the common good. We are fascinated by the way cities are built over time. We firmly believe that a good architectural project can resolve complex situations and give an identity to otherwise characterless places, whether these are abandoned industrial sites or rapidly-growing suburbs.

We focus on all construction disciplines in order to have a complete overview of the project and to be able to maintain control over all of its aspects. Sustainability is one of the primary concepts of our architecture and will be an increasingly important factor in the future given the urgent need to drastically reduce energy consumption and emissions.

Many of your projects were carried out in the canton of Ticino in Switzerland. How do they relate to the location and the local architectural tradition?

Our architecture is always closely linked to its location, so a knowledge of local culture is essential. At the same time an architect is always driven by the quest for something new. The ability to see things with a fresh eye, free from prejudice and with childlike enthusiasm is an important complement to the knowledge and expertise we have gained over the years. This body of knowledge includes an understanding of the local building tradition, which in Ticino means the alpine, lacustrine and rural vernacular culture as well as the work of the masters of the Prealpine Lakes region such as Borromini, Fontana and Maderno. An equally important influence was the Tendenza movement that originated in the canton of Ticino and emerged onto the international architectural scene in the early 1970s, the most authoritative representatives being Mario Botta, Aurelio Galfetti, Luigi Snozzi and Livio Vacchini. However, our architectural approach involved breaking free from the ideas of the Tendenza movement, which we nonetheless assimilated together with many other influences.

When the Chiasso Cultural Centre consisting of the MaxMuseo and Spazio Officina was built in the city centre in 2005, it created an urban space that was previously lacking. How did you develop this project?

The Chiasso Cultural Centre was a wide-ranging project in which our role went well beyond that of the architect. It involved the combination, or coincidence, of many different factors that came together by chance to form a project. Aoi Huber, the widow of Max Huber, the influential graphic designer who worked in Milan from the 1940s to the 1970s, wanted to build a museum and archive dedicated to her late husband. But she didn’t have the resources even to purchase a site. So we decided to contact the mayor of Chiasso, who was well known for his policy of promoting the town’s culture, and asked him to grant free use of an abandoned and contaminated industrial site in a central position close to the school complex. This marked the beginning of a process of environmental remediation that enabled us, with minimal resources, to create a kind of citadel of culture that along with the MaxMuseo now also includes the Cinema Teatro, Spazio Officina and Doppia Palestra (double gym) as well as a large outdoor space available for use by both the cultural centre and the schools. Starting out from a limited mandate with modest economic resources, through hard work and cooperation between the public and private sectors it was possible to create a new location. The process was described by the press as “the cultural reinvention of a city”.

Another important aspect of your work is that of school buildings, such as the residential complex for 280 students for the Student Mentor Foundation in Lucerne in 2013, the Nosedo School Centre in Massagno in 2017 and most recently the Liceo Cantonale in Bellinzona (2018).

We are committed to working towards the common good, social utility and sustainable city development. The Lucerne project enabled a private no-profit foundation to build co-living student housing units in the grounds of the largest old-people’s home in the city of Lucerne, which granted surface rights to the land at a non-speculative price. As a result, good-quality housing could be provided at prices 20-25% lower than those of the private market. In the Massagno School Centre project in the district of Lugano, we completely renovated the original school building dating from 1967, adopting a fair-faced concrete structure and adapting it to contemporary educational needs. The new double gym is available for use by local associations and the local basketball team. By building it partially underground, we succeeded in inserting the large volume sustainably into the urban landscape and integrating it with the network of pedestrian footpaths, using the roof as a recreational space available for public events organised by the municipality, which could also make use of the school canteen infrastructure located on the roof. The School Centre has become the hub of public life and complements the soft mobility network.

It strikes me that the concepts guiding your work are structure, the modulation of space and light, and the use of modules. Do you aim to achieve an expressive simplicity free from ornamentation and stylistic traits?

We believe that in our millennium the concept of style applied to architecture is an outdated and inadequate paradigm. Our architectural approach rejects false postmodern formalisms and the quest for recognisability based on stylistic affectation, seeking instead to arrive at the very essence of architecture. Structure and modules are essential aspects of architecture, as are the modulation of space and light, sustainability and the economical use of resources. The Vitruvian concepts of utilitas, firmitas and venustas, as well as Ruskin’s views on the virtues of architecture, are and will always be valid. To achieve the kind of architecture we are looking for, it is essential to be able to master its physical aspects. In other words we have to be builders. To achieve this, it’s important that the architect maintains control over the project right through to the end of the construction phase.

You choose materials very carefully for their strength, sustainability and low cost. What do you think of the potential of ceramic materials?

Ceramic is one of the oldest materials produced by mankind and was used as early as in the Bronze Age. Over time its use has extended to many fields of application, from industry to the heat shields of space shuttles, from medical applications to the building sector in the form of tiles, sanitary appliances and façade cladding. I even have a watch with a ceramic case and several ceramic dental inlays. It’s a material with exceptional characteristics of durability, hygiene and resistance to the widest range of chemical and physical agents while at the same time being inexpensive. The flexibility of unfired ceramic makes it suitable for the widest variety of range of processing and shaping operations. The material’s weak point is the large amount of energy required to produce it, which adversely affects its overall ecological balance, although the ceramic industry has worked hard to address this issue in recent years. The potential offered by digital printing has opened up many different possibilities, although I personally have no interest in solutions such as wood-look ceramic slabs. On the other hand, we are fascinated by the possibility of producing large-size, high-thickness rectified slabs, which allow ceramic to be used as a material in its own right. We’d like to experiment with large-size profiled ceramic slabs, which could be used in a similar way to fibre cement but with the material characteristics of ceramic. Research into roofing or façade systems with integrated photovoltaics would definitely be an interesting challenge.

Established in 1993, the firm was founded by Pia Durisch and Aldo Nolli.
Their first works include the Swisscom Service Centre in Giubiasco and the restoration of the Social Theatre in Bellinzona (1993-1997) in collaboration with Giancarlo Durisch, the restoration of the Monastery of Santa Maria Assunta in Claro (1997-2005) and the House for a Sculptor in Mendrisio (2000), which won the SIA Award for best private building in Ticino for the period from 1998 to 2003.
Several public projects in the fields of culture and education followed, including the Cultural Centre of Chiasso with the MaxMuseo and Spazio Officina in 2005, the Vocational Education Centre of the Swiss Builders Society SSIC in Gordola in 2011 and the Federal Criminal Court of Bellinzona in collaboration with Bearth & Deplazes in 2013. With these buildings, Durisch + Nolli have won all editions of the SIA Award in the last decade (2003-2015). Their most recent completed projects include a residential complex for 280 students in Lucerne for the Student Mentor Foundation in 2013 and the Nosedo Primary School in Massagno with Giraudi Radczuweit in 2017. In 2012 they won the international AIT Global Award for Interior and Architecture in the Education category and in 2014 the Prix Acier for the best steel building in Switzerland. More recently, through participation in various international competitions, they have also acquired important projects outside the canton of Ticino such as the Assembly and Arts Building of Aiglon College (2017) and the new headquarters of the SRF Swiss television channel in Zurich (2017).