Bologna Together with Cersaie | by Sara Seghedoni

The local Institutions and Associations are unanimous in reaffirming their commitment to the “Bologna Together with Cersaie” Manifesto.

At Cersaie 2022, due to be held in Bologna from 26 to 30 September, exhibitors and visitors will be able to make use of the city’s transport system, exhibition centre, hotels and restaurants in complete safety and enjoy the traditional hospitality for which Bologna and the Emilia-Romagna region are renowned.

“In a complex and uncertain international scenario, Cersaie 2022 is the most important opportunity for the world’s ceramic tile and bathroom furnishing companies to showcase their finest products. This is demonstrated by the presence of almost 600 Italian and international exhibitors who will fully occupy 15 halls in the Bologna Exhibition Centre,” says Giovanni Savorani, Chairman of Confindustria Ceramica. “Our companies are renowned for their excellence in the field of environmental sustainability and at Cersaie will have the opportunity to hold face-to-face meetings with distributors and designers from Italy and abroad, showcase their new trend-setting products and discuss future collaborations. And thanks to the support of the Italian Trade Agency ITA, the show will be attended by more highly qualified international professionals than ever.”

“The success of Cersaie 2021 testified not only to the importance of the exhibition but also to the ability of the city of Bologna to support the leading international events in our trade fair calendar and help them show the very best of Italy to the world,” says Gianpiero Calzolari, Chairman of BolognaFiere. “Last year, BolognaFiere and the city’s main institutions worked alongside Confindustria Ceramica to further improve the quality of Bologna’s renowned hospitality services, and these efforts will continue this year. We are certain that in 2022 Cersaie will once again become the global reference point for the ceramic industry, the world of design and the visitors, all of whom will be welcomed with professionalism and enthusiasm to both the exhibition centre and the city.”

“Cersaie is an international point of reference for one of the most important manufacturing clusters in the Emilia-Romagna region and in our country,” comments the President of the Emilia Romagna regional government Stefano Bonaccini. “In these difficult times, when the war in Ukraine is having a severe impact on the world’s economies, this year’s event has the important role of helping ceramic companies stand united in tackling the emergencies of recent months, particularly the rising costs of energy, raw materials and logistics. Financial speculation is aggravating the situation and threatening the economic and social stability of countries, prompting us to reiterate our call for Europe to impose a price cap. The Emilia-Romagna Region is doing its part to help Italy with concrete measures such as the regasification plant and the country’s largest photovoltaic and wind farm, which we plan to build rapidly in Ravenna. This will make an important contribution to our country’s energy independence and will provide direct support to households and businesses.”

“Cities grow through collaboration with other regions and a process of international dialogue. These characteristics have always been part of Bologna’s DNA, perhaps due to its location on the Via Emilia which has allowed people and new ideas to converge here for millennia, or its University which has been cultivating these ideas for more than nine centuries,” comments Matteo Lepore, Mayor of Bologna. “We have always worked with the rest of the world and Cersaie is one of the most prestigious occasions for the manufacturing industry to meet. We are therefore delighted to welcome once again one of the world’s most important international events, which has brought a sense of pride to our city for 40 years.”

“The ceramic industry is demonstrating great maturity and strength,” comments the Regional Productive Activities Councillor Vincenzo Colla. “Our companies are responding remarkably well and demonstrating the quality of the ceramic industry’s values and economic system. The ceramic industry is a crucial segment of the Emilia-Romagna region’s economy, which alone employs 15,000 direct workers and represents one of the most innovative supply chains in the entire country. This key Italian industry has outperformed other sectors in the pursuit of innovation and sustainability thanks to its constant research into high quality materials and production processes – qualities that in view of the growth in exports are clearly recognised by the global market. I am certain that the exhibition will once again show off the industry’s qualities of resilience and demonstrate the region’s production excellence to the leading national and international buyers.”

“Bologna is ready to welcome architects, companies, and exhibitors to the 2022 edition of the International Exhibition of Ceramic Tile and Bathroom Furnishings,” says Valerio Veronesi, Chairman of the Bologna Chamber of Commerce. “Cersaie is a major international meeting point for industry professionals and enjoys the unwavering support of all the institutions and the city of Bologna. The show’s success is based on the ability to cooperate in order to enhance the opportunities and prestige of the sector and the entire region. The Chamber of Commerce provides support to businesses from businesses and is a model that needs to be followed and replicated.”

“After several difficult years caused by the Covid-19 pandemic, this summer we have finally returned to the flight and passenger levels of the pre-pandemic period,” says Enrico Postacchini, Chairman of Aeroporto G. Marconi di Bologna. “While we are seeing a clear prevalence of international flights, we believe the business segment still has room for growth in order to reclaim the important role that our region has always played in the field of business tourism. As the airport is the main gateway to the trade shows held in Bologna and elsewhere in the region, we hope that this year’s Cersaie will truly mark a return to normal and send out a powerful message that the sector is back on its feet.”

“As Chairman of Federalberghi Bologna, I am delighted to be able to welcome exhibitors and visitors back to Cersaie in Bologna,” says Celso De Scrilli. “During this long and difficult period our hotels have been sorely tested. Despite this, we have continued to invest with a view to meeting the needs and expectations of our guests and to maintaining our important social role in promoting and redeveloping the different areas of the city. Bologna has seen dramatic transformation as a tourist destination over the years, largely thanks to the hard work of our sector’s businesses. We hope that the city’s age-old hospitality tradition will allow all guests at the forthcoming edition of Cersaie to come away with wonderful memories of the time they have spent here.”

“Again in 2022, the “Bologna together with Cersaie” manifesto is announcing this important international trade fair held in our city and the involvement of local institutions and organisations,” says Valentino Di Pisa, Acting Vice Chairman of Confcommercio Ascom Bologna. “Despite the Covid-19 emergency and the current economic crisis caused by the war, soaring costs, energy shortages and drought, local companies have shown themselves ready to address market needs and find solutions for the future. Ascom Confcommercio Bologna congratulates Cersaie for the large numbers of visitors and exhibitors at the show, demonstrating the industry’s global leadership in terms of innovation, technology and design excellence. Bologna looks forward to offering you its customary warm welcome.”

“After hosting the major spring trade fairs with excellent exhibitor and visitor figures, Cersaie marks the return of one of the real highlights of Bologna’s trade fair calendar,” says Agostino Scialfa, Chairman of Confindustria Emilia’s Tourism and Culture Sector. “Our city guarantees the highest levels of safety and hospitality and will continue to do so this autumn thanks to the hard work and dedication of everyone involved. Visitors will have the opportunity to combine a visit to the world’s most important ceramic tile exhibition with the discovery – or rediscovery – of what is a truly unique city. With its world-famous arcades, cuisine, culture and entertainment, it gives visitors the chance to hold fruitful business meetings while also making the most of their free time. Because Bologna is both smart and hospitable, in keeping with its tradition.”

Working together with the local institutions to welcome companies and visitors to this important international trade fair is a challenge that the railways accept enthusiastically. “Trenitalia will be present with its Frecce train network, of which Bologna station is one of the main hubs,” comments Pietro Diamantini, Alta Velocità Business Director at Trenitalia. “Ever greater integration with the airports will make it even easier to reach Bologna from abroad, while the new Paris-Milan Frecciarossa service combined with the Milan-Bologna high-speed trains will represent an innovative solution for French customers.”

“The long-distance rail network will be integrated with the Trenitalia Tper regional service,” notes Alessandro Tullio, the company’s CEO. “We have a fleet of latest-generation Rock and Pop trains which combine greater comfort and better performance with approximately 30% lower electricity consumption than previous models. With more than 900 daily connections, Bologna is at the centre of all the main routes and will be easy to reach from anywhere in the region. And as at last year’s show, a special service for visitors to Cersaie is also being planned.”

Hotel bookings for Cersaie 2022 have already exceeded the levels of the same period last year. “Cersaie is one of the most important global showcases for Bologna, and the city is proud to be able to support its further growth after returning to business in 2021,” says Giovanni Trombetti, Chairman of Bologna Welcome. “This year we are again supporting the exhibition with a wide range of destination management services such as hotel accommodation, delegation and guest hospitality, transport and transfers, tourist attractions and online and offline information services. For this purpose, we have developed a range of services including a new and more powerful booking system and a live chat for guests. We want visitors to Cersaie to feel at home in Bologna.”

Other articles published in Cersaie 2022 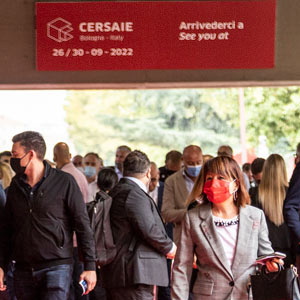 Cersaie 2022, the exhibition space is almost completely sold out