2020 was a difficult year for the Italian tile industry. Amid the contraction in the global market, the industry experienced a slowdown in sales but was able to limit the damage and maintained a more than 50% share of sales by value in Western Europe. It is now ready for the challenges that lie ahead in 2021.

The figures compiled by Prometeia in its December 2020 forecasting report for the world ceramic tile industry speak for themselves: amidst an 8.7% decline in global production to 11,349 million square metres, Italy was the worst hit of the world’s top five producers with an 18% contraction compared to the -12.6% of India, the -9% of Brazil, the -8.4% of China and the 4.9% of Spain. One of the factors responsible for this decline in production was the factory shutdowns imposed in May last year, which were longest in Italy (5 weeks), shorter in Spain (2 weeks) and entirely absent in Turkey. In Spain and Italy, the second quarter losses had already been largely absorbed by July, and following the boom in production in August (plants continued to operate at full capacity in what is normally the slowest month of the year) by September the production index had returned to similar levels to those of 2019. The overall result was a full-year decline in sales for Italy of -4%. 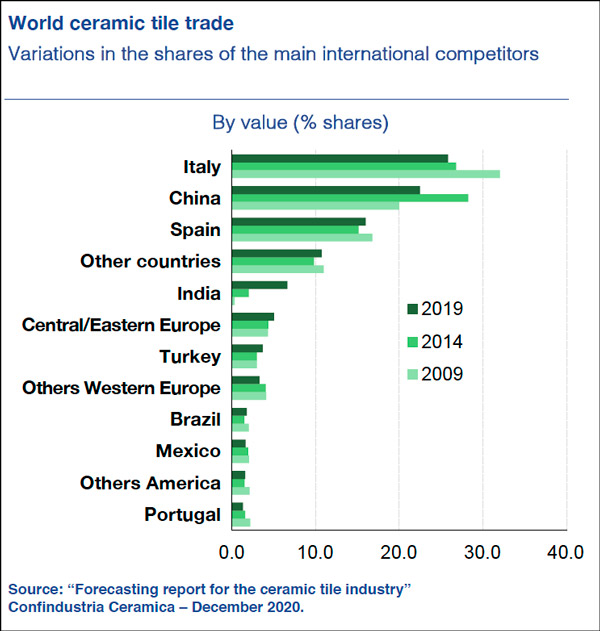 The impact on world trade

The slowdown in production led to a 5.8% drop in world trade and a generalised fall in purchases by importing countries (USA -8.4%, France -2.3%). The sole exception was Germany, which saw a 9.4% increase in its purchases on the global tile market. The Far East, which accounts for 24.6% of world consumption, recorded a significant drop in tile consumption (648 million square metres less, or -8.6%). This downturn was in line with the trend in residential building investments. The large contractions in France (-13.8%) and Italy (-9.2%) were matched by a decline in tile consumption of 3.4% and 11.7% respectively; in the USA building investments grew by 3.7% but tile consumption fell by 5.6%; and in Germany investments grew by 2.8% and tile consumption increased by 10.8%, fuelling a corresponding increase in imports from Italy. The fact that the tile market was much more dynamic than construction investments in France and Germany reflects the growth in popularity of ceramic tiles.

The figures for Italy

Returning to Italy, tile sales in 2020 totalled 390.6 million square metres, down 4% but a significant improvement on the -16.8% recorded in May. The situation would have been far worse if it had not been for exports, which fell by just 1.9% compared to the forecast of -14.1%, limiting losses to 6.2 million square metres. This was attributable to the trend in the third and fourth quarters of the year, which offset the negative performance in the second quarter (-19.6%). It is worth noting that sales to the German market played an important role in propping up the Italian tile industry in 2020, as exports would otherwise have fallen twice as rapidly as they actually did. The fact remains that Italy holds a 12% share of global export trade, while China remains firmly at the top of the rankings with 22.6% followed by Spain and India (15.7%).

It is interesting to take a look at the global trends in tile demand. 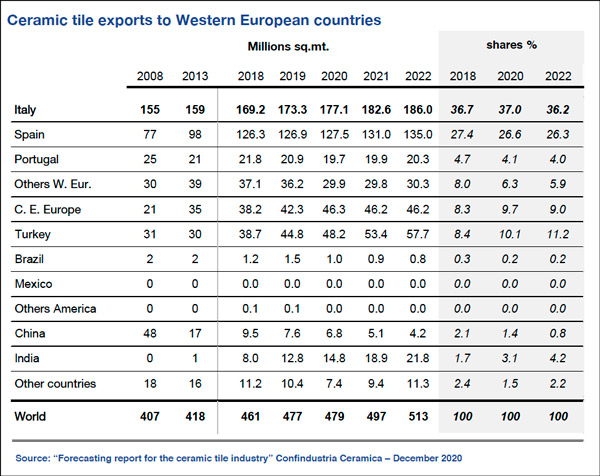 In Western Europe, the health emergency led to construction sites being shut down and fewer building permits issued in the first half of 2020, in turn resulting in a significant drop in construction investment as a yearly average. While this affected all areas of activity, it was more pronounced in the residential construction segment. However, the situation varied significantly between the different countries in the region, from a sharp decline in investment in Spain, the UK and France to growth in Germany. The expansionary phase in German construction is expected to continue through 2021-2022, albeit at a more moderate pace, while construction investments appear likely to return to positive territory in Spain, the UK and France. In 2021 tile consumption in the region will increase by 4.8%, fuelling 3.1% growth in exports and pushing Italy’s market share up to 34.1% compared to 33% in 2018.

Unlike what happened after the 2018 crisis, residential construction investments and tile consumption are both expected to pick up in 2021 (when GDP is forecast to increase by +5%), largely as a result of the government’s expansionary policies such as the 110% Superbonus tax incentive. This will benefit both domestic producers (who can expect to see an approximately 8 million sqm increase in sales) and foreign importers. Although a slowdown may occur in 2022, by the end of the year Italian domestic sales will have exceeded the 2019 levels.

The double-digit decline in residential construction investments had a negative impact on the Spanish tile market and consequently on imports from Italy, which fell by more than 0.5 million square metres in 2020. But the expected recovery (in 2021 GDP is forecast to increase by 6.6% and tile consumption by 8.6% to 151 million sqm) will enable Italy to make up the ground it lost in 2020 by the end of 2022.

The renovation market propped up demand for tiles and compensated for the sharp decline in the new build market (consumption fell by just 3.4% in 2020). The rebound in GDP (+7.3% in 2021) will drive strong growth in construction investments (+14.1%), in turn boosting tile consumption by 2.5%. This will also benefit Italian exports, which are expected to grow by 3.3%.

Despite the recession in 2020, when GDP fell by 6%, investments in construction are estimated to remain in positive territory (+2.5%) and tile consumption is expected to see a small increase. This trend will benefit Italian exports, which are estimated to have grown by 10.1% in 2020 to 59.9 million euros. Even better figures are expected for 2021 with sales of 62.3 million euros, up 4%.

GDP is estimated to have fallen by 12.5% in 2020, with a sharp contraction in building investments (-13.4%) and a 17.8% drop in Italian tile exports (bear in mind however that sales totalled just 8.1 million square metres, less than one seventh of the volume sold to Germany). The outlook for the two-year period 2021-2022 is more encouraging, with GDP recovering and imports from Italy and Spain remaining stationary or decreasing slightly.

Together with Germany, Austria remains a reliable export market for Italian tile manufacturers. GDP is forecast to grow by 5.3% in 2021 and construction investments by 2.6%. In this context, tile consumption will reach 22.1 million sqm, with Italian exports accounting for more than 50% of total consumption at 12.7 million sqm (up 1.6%). In 2022, sales will be close to 13 million sqm, a level not seen since the early 2000s.

The direct and indirect effects of the pandemic (including the fall in oil prices) led to a sharp contraction in Russia’s GDP in 2020 (-6.25%) and a corresponding decline in construction investments. Tile consumption has consequently decreased (-6.6%) and Italian companies are struggling to penetrate the market (Italian exports amount to just 1.8 million sqm). This is not expected to improve in the next two years given the competition from producers in India and Eastern Europe.

Although residential construction continued to expand in 2020 (+3.7%), it was a poor year for tiles with a 5.6% decline in sales by volume. With import duties imposed on products from China, tile sales are expected to see a strong recovery in 2021 and this should also benefit Italian exports (33.6 million sqm, up 3.2%).