A milanese education | by Alessandra Coppa

Milan-based firm Arassociati was founded in 1997 by Marco Brandolisio, Giovanni Da Pozzo, Massimo Scheurer and Michele Tadini. The name of the practice refers to the initials of Aldo Rossi, the celebrated architect with whom they worked from 1982 onwards and collaborated closely on important projects such as the Schützenstraße residential complex in Berlin and Milan Linate Airport. The architects are continuing their long-term research efforts with the aim of revisiting the typological characteristics of the Milanese tradition while looking to the future. Much of their work consists of intensive design and construction projects spanning different scales and typologies within the Milanese urban landscape (residential, hospitality and urban planning), in many cases located in areas of great historical interest where they fill in gaps in the urban fabric that have remained vacant since the post-war period. 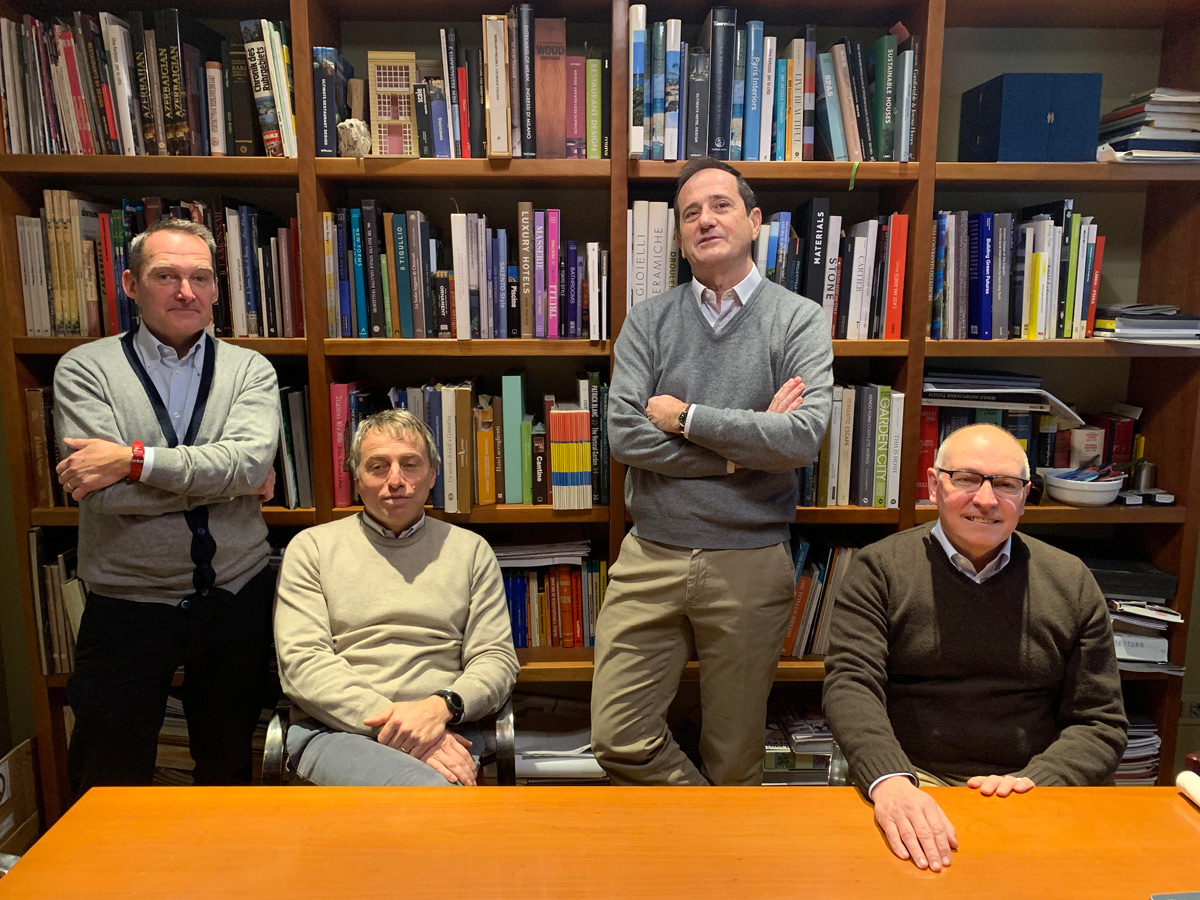 How much of Aldo Rossi’s vision do you retain in your current projects?

We worked with Aldo Rossi until his untimely death in 1997, and although we learned a great deal from him we carried on the practice independently. At times we were critical of his approach, so we distanced ourselves from his language and made different choices. But after all, he himself encouraged us to follow our own path in architecture. Certainly, the relationship between typology and morphology and between the city and the landscape are also ever-present aspects of our own thinking.

Our association with Aldo Rossi and with Luca Meda was not only important from an architectural perspective but also enabled us to develop a working method for approaching projects, an ethic of conduct and a sense of respect towards the people we work and interact with. In short, it taught us to approach this profession and the consequent human relationships with courtesy and curiosity while pursuing our own vision.

What is your design philosophy? One aspect that seems clear to me is the idea of continuity between building and territory/city. You maintain a good balance between “neo-rationalism” and respect for the context, and in the case of renovations, respect for the existing buildings within a new urban landscape, a discreet architectural language marked by stylistic continuity but without resorting to historical mimicry.

We believe in the need to adopt different approaches within the city and to adapt projects according to the existing situation.

In particular, the historic centres of cities are complex, multi-layered environments that often entail very long lead times, so we believe you have to proceed with great caution. The idea of leaving an iconic mark makes no sense. You have to be aware that you are working in a very delicate, historically important context where the spirit of the city is deeply rooted.

In the case of consolidated cities and new suburbs, the overriding considerations are the relationship with the landscape and the innovative criteria of the new metropolitan city, an area that is not devoid of history but where the architectural language can be freed and influenced by new relationships, such as the presence of greenery within the landscape.

Based on these considerations, we focus on typology, on the structure of the façades and on the relationship between interior and exterior spaces to ensure that our buildings are perceived as part of the evolving urban fabric rather than blending into their context.

The book written by Anna Mainoli and published by Forma discusses your intense design and construction work over the last twenty years in Milan with projects spanning different scales and typologies. Alongside these projects in the city’s historical centre, you have also been involved in interventions in the new areas of Milan as the city evolves a polycentric metropolis. What are your most significant projects? Examples that come to mind include the restyling of the Casa degli Artisti, your project for the Starhotels Rosa Grand hotel in Piazza Fontana which is closely linked to the history and transformations of the city, and the new Hotel Viu Milan, the hub of the new urban redevelopment of the Porta Volta district.

As already mentioned, we have a Milanese background so the relationship with modernity and Milanese rationalism is part of our heritage. We are particularly interested in the solutions adopted by the city’s great twentieth century architects, who created almost a style of their own.

It is this variability and variety of solutions that has the biggest influence on our architecture. In our work we focus on these archetypes of modernity and adapt them to the needs of the contemporary world, diversifying the solutions adopted. So rather than the language of the architect, we model our work on buildings and their ability to interact with the landscape and the historical fabric. It is a process of reinterpretation and innovation that breathes life into the concept of the new.

So along with the projects you mentioned, I would also point to our recent work such as the Porta Nuova Centro residential complex, the developments in Corso Garibaldi 123 and 95 (Habitaria), and those under construction in Via Mangone, Via Adamello 10, Via dei Canzi and Bosco Navigli. 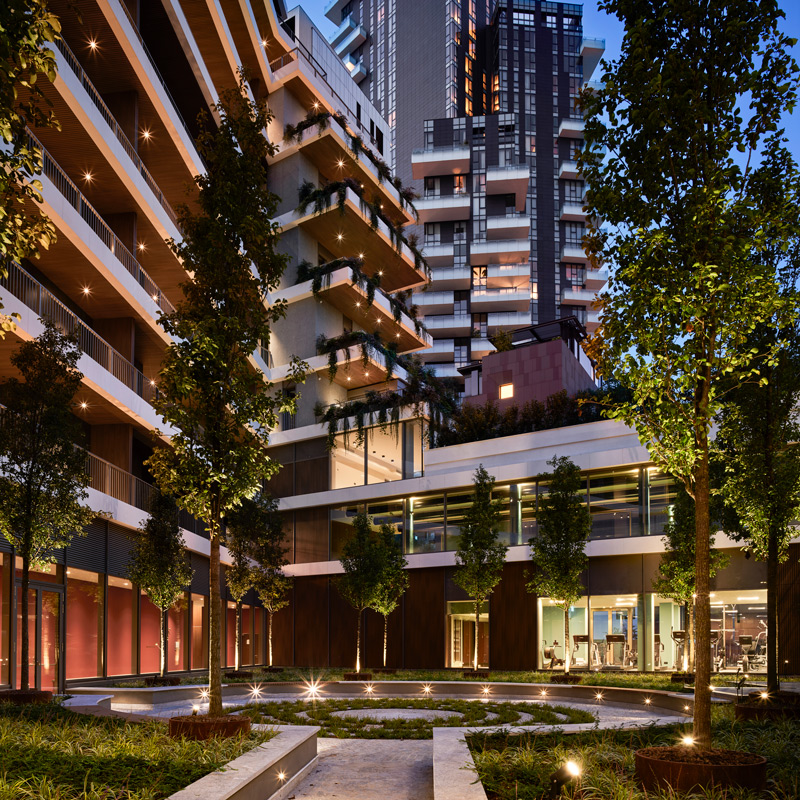 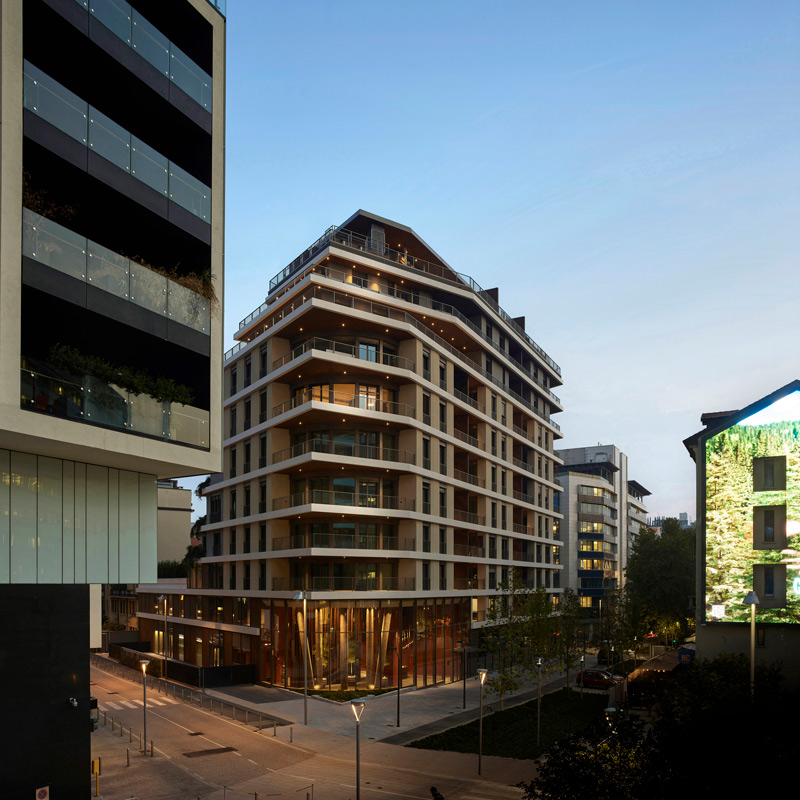 You have carried out a number of projects in Azerbaijan, including the Heydar Aliyev Museum, the Pavilion for Expo 2015 and the Khojaly Memorial. How did you establish contact with this country? How is the morphology of the architecture adapted to national identity? In addition, the EXPO pavilion provided an important opportunity to reflect on the issues of sustainability and the reuse of temporary structures.

The projects carried out in Azerbaijan were the result of our participation in a series of competitions and our collaboration with the firm SimmetricoNetwork.

The Azerbaijan Pavilion project provided an outstanding opportunity for us to carry out research and explore the themes proposed by Expo Milano – namely sustainability, new forms, impermanence and multimedia – with commitment and almost a sense of idealism.

We created a unique building that represented the country’s rich biodiversity as part of an educational exhibition concept and with a highly innovative and reusable building design.

However, the project proved to be an illusion that faded in the aftermath of the Expo when, apart from the media event itself, we found there was little interest in the country to carry on this experience ethically.

What do you think of the aesthetic potential of ceramic materials in architecture? Do you use ceramics in your projects?

Ceramic is a highly versatile, durable and eco-friendly material. It is part of the history of both decoration and architecture, and is a valid alternative to stone construction.

We appreciate its characteristics and use it extensively both in interiors and for creating façade claddings. Thanks to the use of large-size panels and the potential for many different colour textures and extruded shapes, it allows for great creativity and ease of construction.

The practice Arassociati was founded in 1997 by Marco Brandolisio, Giovanni da Pozzo, Massimo Scheurer and Michele Tadini. In 2004, it won the International Theatre Architecture Prize for the reconstruction of Teatro La Fenice in Venice. The firm has also participated in international exhibitions, conferences and competitions. Major projects include the renovation of the former Philips Site in Louven, the StarHotel Rosa Grand hotel in Piazza Fontana in Milan, the Tiscali Campus in Cagliari Sa Illetta, the renovation and conversion of the cloisters in the Church of Santa Maria del Carmine in Brescia for use as a university library, the Muller-Martini area in Zurich, the MAMbo Museum of Modern Art in Bologna, the renovation and expansion of the TNP in Villeurbanne and the Heydar Aliyev Museum in Baku. The firm designed the Azerbaijan Pavilion for the Expo 2015 in Milan and completed the renovation and new interior design of the Hotel ME Il Duca by Melià in Milan. Other projects in Milan include the restyling of the Casa degli Artisti in Brera and the Hotel VIU in the Porta Nuova neighbourhood. A major residential and hotel development has been under construction in Canouan in the Caribbean (Granadine) since 2016. In 2018, Arassociati in partnership with Stefano Boeri Architetti and AG&P won the competition for the Corte Verde residential project in the San Cristoforo area in Milan, now developed as part of the Milano 5.0 project. In 2019, the practice was commissioned to design the Meysari Hotel and Spa Complex in Azerbaijan. More recently, it has been involved in the design of several new residential projects in Milan.