Stepping inside this duplex apartment in Milan’s Porta Venezia neighbourhood, owned by a start-up professional living in Padua, it’s impossible not to feel a sense of surprise, amusement and curiosity. What, one wonders, is the hidden symbolism behind this 15-square-metre space filled with seemingly obscure two- and three-dimensional signs? The rebus puzzle is fascinating, and we would like to solve it immediately. We recognise two objects that unmistakably refer to Sottsass: the star-shaped Hsing vase on the wall and the famous Callimaco skittle-shaped lamp produced by Artemide. 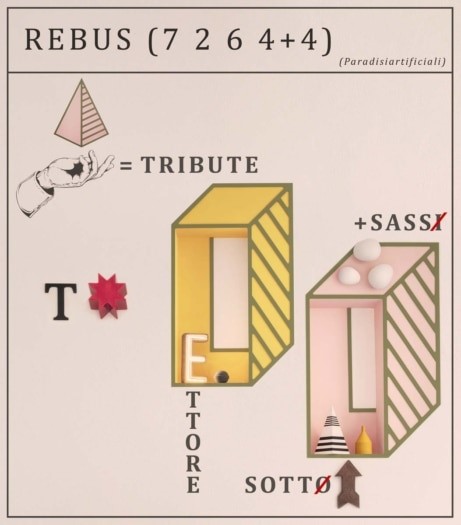 Lorenzo De Nicola (although he prefers to be called just Lorenzo), an architect from the anonymous Milanese collective Paradisiartificiali which created the project, solves the puzzle for us. The solution is „Tribute to Ettore Sottsass“, with the accent on the last syllable symbolised by the 3 stones („sassi“ in Italian) of the Gregg design lamp.
And he tells us how the project came about. „The client asked us to replace the narrow and impractical 4-metre-high spiral staircase. We believe that everything, from the largest to the smallest detail, offers a design opportunity. „We’ll find a solution,“ we replied. The scope of the project gradually expanded and we ended up transforming the entire ground floor space into a lounge where customers and friends could meet, satisfying a need that the client had initially been entirely unaware of.“
But although the end result had been agreed on, the idea of how to get there came about entirely by chance. „We had read that the Memphis Group would be celebrating its 40th anniversary. Ettore remains a source of inspiration for us, so we wanted to honour him and began looking for the perfect ingredients to celebrate,“ says Lorenzo.
The „cake“ is a symbolic representation of the meeting held on 11 December 1980 in Sottsass’s small apartment in Via San Galdino in Milan. „We were young back in those days. Ettore wanted to launch a new project that would give us the freedom to choose what to design and produce,“ recalls Michele De Lucchi. „That night we unleashed all our enthusiasm and imagination. When the Bob Dylan record got stuck on the word Memphis, Ettore proposed using that as the name of our group.“
By skilfully blending graphics and design, shapes and colours, and choosing products by both familiar and lesser known names in the world of design and large-scale retail, the Paradisiartificiali group created a project that pays tribute to the concept of intellectual freedom underpinning the Memphis ideology.
The project features a series of meticulously designed details, starting with the interior white walls and ceiling and pearl grey laminated porcelain floor tiles produced by Lea Ceramiche. The choice of the large Slimtech series ultra-thin slabs from the resin-inspired RE-evolution collection creates a hi-tech, environmentally friendly, hygienic and hard-wearing surface that combines elegance and compactness and is brought to life by the trowel marks.
The new staircase is a lightweight, slender zigzag-shaped self-supporting structure made of press-formed sheet metal with a sage green epoxy paint finish.
The furnishings include the Caruso sideboard to rediscover the magic of listening to music; the Pipe armchairs with lines reminiscent of inflatable furniture; the Le Morandine vases as a tribute to painter Giorgio Morandi; the E-shaped Alphacrete neon lamp; and the Charles & Ray Eames‘ turned wooden stool produced by Vitra, which is organising a major exhibition to celebrate the 40th anniversary of Memphis in its museum on the outskirts of Basel.